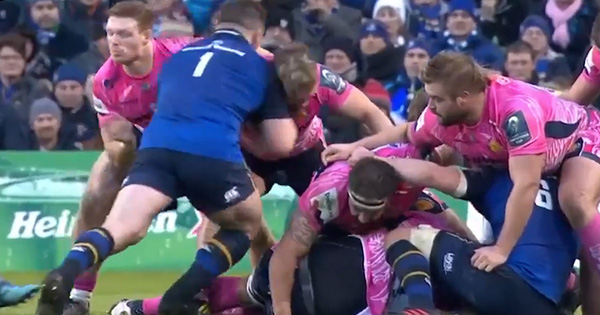 In their Champions Cup match on Saturday, Leinster came from behind to beat Exeter and remain at the top of Pool 3. However, they were lucky to finish at full-strength as prop Cian Healy was only shown a yellow card for this reckless shoulder charge.

Many people felt that red should have been the proper choice, with the commentators even admitting that would be the likely outcome.

Healy should count himself extremely lucky. 2017 has been a banner year for the shoulder-charge red cards, the most infamous of which is the shot that Sonny Bill Williams delivered to the head of Anthony Watson in the second Lions Test.

Sekope Kepu is another recent example, with his shoulder charge in Australia’s loss to Scotland.

Leinster were already in a precarious situation, having lost Johnny Sexton to a head-knock and being down 3-7 just inside of 20 minutes. Losing an international-quality prop for the remainder would’ve been devastating.

Exeter took a 17-9 lead into the break, but Leinster managed to avoid further ill-discipline from Scott Fardy’s yellow card and crawled back with tough defence and the steady boot of Isa Nacewa, taking the match 22-17.