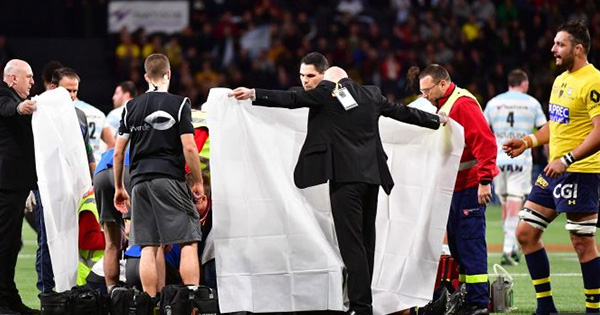 Clermont winger Samuel Ezeala has had a rough start to his club rugby career. The teenager was knocked out cold after a nasty head clash with Racing 92’s Virimi Vakatawa. Thankfully, he seemed fine on Monday, flashing a smile and a thumbs-up from his hospital bed.

The incident occured just under an hour into the match, as Racing were enjoying a 39-6 lead.

The Elusive Vakatawa broke free and made a run of several metres before being met by Ezeala, who turned 18 just last month, in a collision that left the youngster sprawled out on the ground.

The next few moments were somewhat unsettling as training staff came out and even held up sheets as they began assisting Ezeala. Shortly after, he was carted off the field.

Thankfully, Clermont has issued a statement saying that Ezeala’s MRI scan was clear and there was nothing to worry about. He should be free to return to the club on Tuesday. Vakatawa visited him in hospital, giving him a French jersey and posing for a photo.

Earlier he had tweeted:

“I was not planning to hurt you today my brother,im sorry. Speed recovery and hope to see you back on the field soon. God Bless You my brother”

As for the rest of the match, things continued to go downhill for Clermont as the champs went down by the shocking final score of 58-6.