Was the 2020 Bledisloe Cup thriller up there with the 'Greatest game ever played'? 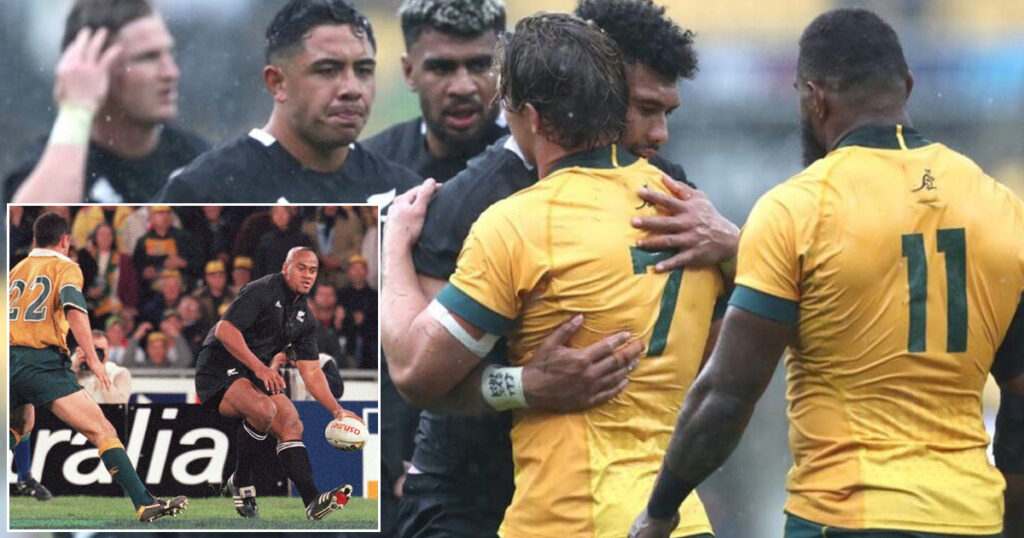 Just how good was last weekend’s Bledisloe Cup match? For many reasons, international rugby’s return to action in Wellington rightly drew comparisons with “the greatest game of rugby ever played”.

That was, of course, the epic 39-35 victory for the All Blacks over Australia in 2000 whereby Jonah Lomu broke Wallaby hearts with a last-minute try to win a game which ebbed and flowed throughout the entire 80 minutes.

The weekend’s match didn’t quite match 2000 on the number of points scored, but the drama, quality and significance of the encounter was certainly at 2000-esque level.

It’s hard to tell for which side the match meant the most, with the All Blacks desperate for their apparent struggles in Wellington over the past three years not to become a trend and the Wallabies looking to finally get back on form with a new-look squad and fresh impetus from head coach Dave Rennie.

But the question still remains: was this match better than that 2000 classic?

In order to even try to answer that question, we must first look back on what made that game such an iconic, monumental spectacle. Take the flurry of three tries inside five minutes from New Zealand and you get a proper arm-wrestle, a game which both sides wanted to win, instead of trying not to lose.

It was rugby at its best: ingenius plays, positive attacks and the occasional poor defence. But that’s what you get with fractured, loose play. The fact that the game was firmly in New Zealand’s grip, then the scores were level before Australia moved ahead only for the All Blacks to steal it at the end was pure cinema.

It was a never-give-up attitude from both sides. Added to that, the rivalry that few can match in world rugby meant that it was more than just a rugby match.

Australia were the world champions at that point, having won their second tournament the previous year; New Zealand felt they should have won the World Cup and, to a degree, were probably still smarting after their semi-final capitulation to France at Twickenham.

All that was on the line.

The context of last weekend’s match could not be more different than in 2000. For a start, neither team is world champion, and the rivalry somehow doesn’t feel as raw or as meaningful as it did 20 years ago. Perhaps the recent form of the Wallabies has something to do with it.

But make no mistake, that rivalry is starting to ignite again. Don’t tell an Australia or All Black supporter that the Bledisloe Cup doesn’t mean anything, because it does. The new coaching regime within the Wallabies and the arrival of new players has given the Aussies a shot in the arm.

And they played superbly. As did the All Blacks, who were very lucky to get away with Rieko Ioane’s foot in touch in the lead-up to Jordie Barrett’s try in the first half.

The parallels to 2000 in terms of the drama and tenacity of both teams is the most evident aspect. The tries from Aaron Smith and Marike Koroibete were sensational, with both sides going absolutely toe-to-toe.

The openness and positive play was another similarity to 2000: after Reece Hodge’s agonising penalty miss, the All Blacks got back onto the Wallaby line in the 87th minute. They could easily have gone for the drop-goal to win the match, but elected to go for the try. That says something about their mentality.

The fact that the ball was turned over several times in overtime was proof that both sides wanted to win, and needed to win. It was only when the Wallabies breathed a huge sigh of relief after turning over the All Blacks in the last play, that they, exhaustedly hoofed the ball out.

Indeed, perhaps the draw was the best option, neither team deserved to lose.

Without a doubt, both matches were of epic proportions but nothing will quite match the back-and-forward nature of 2000. The finish this year was unquestionably more impressive, as unlike in 2000, there is no injury time once the clock is red.

Both Australia and the All Blacks showed just how far the game has come; their handling and discipline in slippery conditions well past the 80 minutes was incredible.

2000 was better, in the context of the times and the utterly bonkers nature of the match. But the 2020 version was a very, very close second.

Was the 2020 Bledisloe Cup thriller up there with the 'Greatest game ever played'? | RugbyDump - Rugby News & Videos