Confusion between Italy and referee in bizarre Six Nations moment

It was a bizarre first half of rugby in Dublin in Dublin today as Ireland played host to Italy in the Six Nations.

It all started with a red card for Italy at a crucial stage in the game with the scores at 7-3.

From there on – things went from bad to worse for the Azzuri.

watch Ireland’s first try of the game below

Ireland go over and secure the first points of the game ☘️ #IREvITA #GuinnessSixNations pic.twitter.com/tAJ58br7eF

The Italian front-rower Hame Faiva was sent off after a shoulder to head contact on Dan Sheehan.

Following this, there was confusion between the Italian skipper Michele Lamaro and Nika Amashukeli as it was looking like the Azzuri would have to play with 13 men in order to contest the scrum.

After minutes of back and forth and visible confusion between Lamro and Amashkuli – the decision was eventually made to have the scrums uncontested.

We even managed to see a back in the scrum as you can see in the image below. 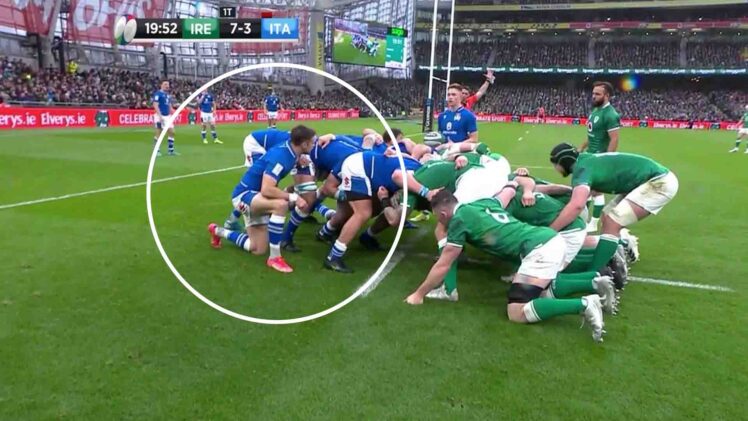 From thereon in the floodgates began to open with Ireland immediately making the most of the man advantage.

We can see Ireland running in for their second score soon after the sending off for Italy.

Many fans weren’t happy at the decision to go uncontested – here are some takes from across social media on the Six Nations moment this afternoon.

If scrums are uncontested, why do you need three front rowers?

Imagine paying money to watch this game, seeing Italy go down to 14.

Then seeing Italy go to uncontested scrums with 13 players.

Posted By: Teddy Parker
Thanks
Sorry there has been an error