Corey Flynn and Liam Messam tussle sorts itself out 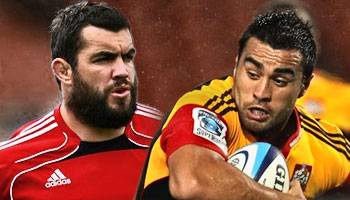 This is an incident from the Crusaders vs Chiefs match that had been talked about last week, but not shown yet so before it becomes too ancient, here it is for those of you who were keen to see what happened.

You saw a great clip that featured an act of good sportsmanship last week, with Corey Flynn being involved in helping out an opposition player after he was knocked out and in a bad state on the floor. Well, this is what happened later in the match.

Crusaders hooker, Flynn, somehow managed to catch Liam Messam in the face with his boot after tackling him. Messam took exception to it, and dished out the punishment in the way that many of the older visitors on the site may be able to relate to.

Describing the incident afterwards, Flynn said that he heard a roar coming from Messam, who was obviously in pain after taking the full brunt of a boot to the face.

“I heard him yelling and then sort of clawing up me, so I knew something was coming,” Flynn recalled with a grin. “That was why I covered up. But we had a yarn afterwards and I apologised.

“When he told me what happened, I can understand why he arced up over it because I probably would have done the same. It was a little wee tussle, but we had a cuddle-up after it, so it was fine. It was footy, mate, just footy,” he said.

The incident, which Flynn insists was an accident, was investigated by the citing commissioner but later dismissed, possibly for the reason that they sorted it out among themselves.