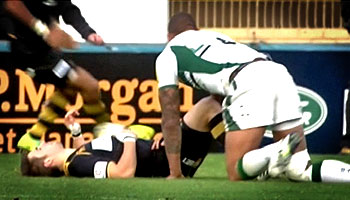 During the RWC England’s Courtney Lawes picked up a two week ban for a bit of overzealous play against Argentina. The incident was preceded with a huge hit that some felt was borderline illegal. This hit is similar in nature, but he got it spot on.

Lawes has gained somewhat of a reputation for smashing his way around the park. The athletic lock is a machine in the loose, a great lineout forward, and thrives on the physical side of things. He makes no secret about the fact that he loves putting in big hits, and he does it regularly.

Against Wasps the Saints lock demolished flyhalf Nicky Robinson as he put a sneaky kick through. Lawes read it well and if you watch carefull you can see that he comes from a few meters back, building up a good head of steam before launching his 6ft7 frame into the number ten.

“I’m not a dirty player and I don’t go out to play dirty, I don’t bother with fighting and stuff anymore, just crack on with my game,” he said recently.

“I live on the edge and I want to make big hits and I do my best to stay on the right side of the referee, sometimes I’m going to slip up and make a mistake like last week (referring to a yellow card) – it’s going to happen – but I’m just going to play my heart out for the team.”

He also smashed Hugo Southwell later in the game, leaving Southwell on the turf for a bit too.

“His workrate for a second rower is phenomenal. I can’t think of any second row in the world that covers as much ground as him, and makes as many influential, positive hits,” said Austin Healey.

One of the most exciting young talents in world rugby, he’ll be around for Saints and England for some time to come, and will turn out for Saints in the Heineken Cup this coming weekend. Have a look at the related posts below to see more of the good and bad of Lawes in action.