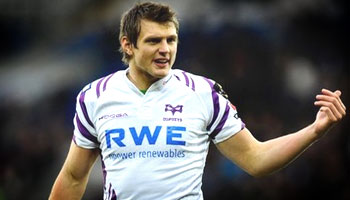 In what was a scrappy Magners League game, Leinster beat Ospreys 15-10 at the RDS on Friday night. Jonny Sexton kicked all Leinster’s points, while Dan Biggar had a shocker with the boot, including a kick that he’d rather forget about.

Ospreys fielded a weakened side that weren’t expected to test Leinster much, but a losing bonus point left the Welsh region feeling as though they’d done okay, considering the difference in the lineups. Neither side will have been overly pleased with how they performed though.

Jonny Sexton did well for Leinster however, kicking all their points with five penalties, while Justin Tipuric scored a try for Ospreys. Biggar didn’t have a great night, as he missed a few vital kicks late in the game, and was seemingly inspired by goings on at Wembley recently as he smashed one of his penalties directly into the crossbar.

The ball moved on the tee as he was about to strike it, which seemed to cause the blooper. It was amusing, but coach Scott Johnson downplayed the poor kicking performance, which included just two successful shots out of seven attempts at goal.

“I thought Dan played very well; we dont do blame for missing kicks, especially when one of them was as a result of the ball falling off a kicking tee on his run up. I was proud of the way he played and proud of the way the guys played generally,” he said.

While it’s good for a laugh, goal kickers will inevitably have bad nights occasionally, but young Biggar kept his chin up and will no doubt bounce back.. in much the same way as the ball did.