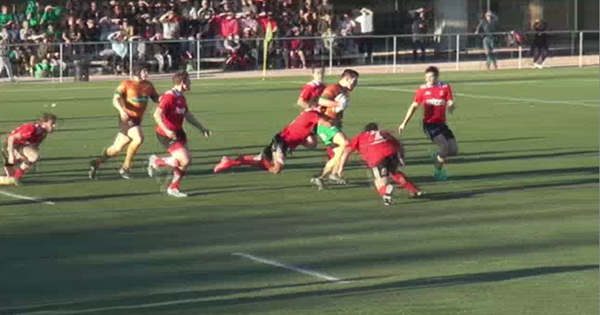 This tackle, that took place in Spain recently, has caused a large amount of debate on our social media pages after we shared it yesterday. The challenge, made by Alex Silvestre in the Spanish 2nd Division match in Valencia, unfortunately resulted in a bad knee injury.

As you can see, Silvestre comes in from the side, while another player takes the hard running opposition from behind, causing him to end up in a really awkward position.

The tackle itself, despite being courageous, was not perfect from a technical standpoint as he got his head on the wrong side, but it’s the way that he chopped the legs that has caused the stir, and no doubt angered the referee.

‘Chop tackles’, when players dive in and hit the knees or below with their shoulders first, have been penalised in recent years due to the dangerous impact they can cause.

While we can only see one angle and the player appears to make an attempt to wrap his arms around the ball carrier, the result was unfortunately a very serious knee injury, reportedly an ACL tear (according to our sources).

The referee immediately blew his whistle upon impact, as in his view, it was dangerous. The consensus online, however, has been that the tackle was fair.

Was this even a ‘chop tackle’? Have a look for yourself and let us know what you think of it.

We wish the injured player well in his recovery!