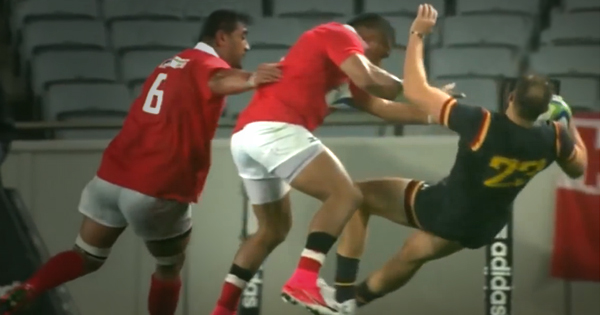 David Halaifonua delivered one of the more powerful tackles you’re likely to see as he nearly knocked the boots off Cory Allen when Tonga and Wales met in Auckland. While the hit was reviewed, the TMO ruled that it was completely legal and play resumed.

Allen came on just after half time as a substitute for Alex Cuthbert and minutes later got a chance to streak down the wing. However, before he could get too far, he was met by lurking fullback Halaifonua. It was a shot that left Allen dead in his tracks, with his head snapped back like a ragdoll.

Allen went down hard and was then attended to by the physios. However, he was quick to get up and even had a smile on his face. He later tweeted about it:

Once the tackle was reviewed, referee Nick Bryant was satisfied that it was low enough and that there were arms in the challenge.

In a match that was rescheduled from Tonga to Auckland’s Eden Park, Wales managed to come out ahead 24-6 after a very physical encounter.

Tongan captain Siale Piutau said: “I’m proud of the boys for the effort… It was physcial. It was a tough battle. We made too many errors at crucial times and Wales took their points when they needed it.”