David Pocock scores first half hat-trick against the Highlanders 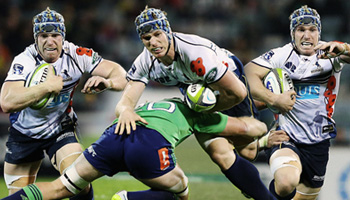 Brumbies flanker David Pocock had another sensational game at the weekend, this time scoring a hat-trick of tries against the Highlanders, all in almost identical fasion, and all in the first half. The Brumbies led 31-6, were scoreless in the second, but won 31-18.

Pocock was inspirational throughout, and to add to his growing reputation as a serious force on the field and a humantarian off it, he celebrated his tries with the sign language signal for clapping. Something that was lost on one Australian journalist in particular. 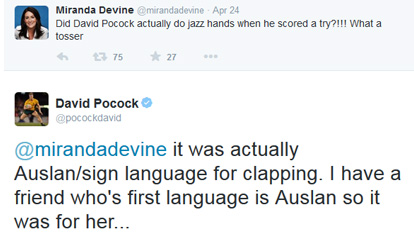 Ouch. To her credit, she later apologised and congratulated him on his well earned hat-trick.

Highlanders skipper Nasi Manu, off to Edinburgh soon, described Pocock as a ‘demon’.

“He’s a good player, he’s been unfortunate with his injuries but he’s a demon over the ball and you have to have your technique perfect if you want to get him off it,” he said.

Pocock himself paid tribute to the forwards around him.

“We knew we had to start well and get the rhythm right. Credit to the forwards, I thought our rolling maul was outstanding,” he said.

Last week we featured a video and poll about him and his great play at the breakdown, and the inevitable comparisions to current Wallaby skipper, Michael Hooper.

We asked who you would rather have starting for your side, and Pocock came up trumps. This coming weekend, the two will meet when the Brumbies take on the Waratahs.

“It’s a big game against the Waratahs next week, we’ve got stuff to improve and the Tahs have been in really good form,” Pocock said. Below is a recap of his tries and general play.