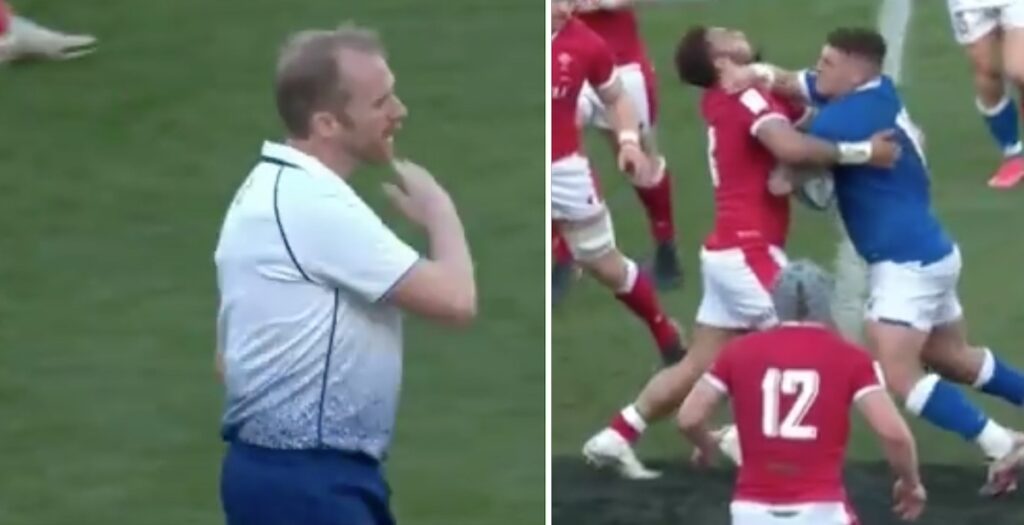 Italian prop Marco Riccioni was lucky to receive just a yellow card for leading with his forearm during Saturday’s Six Nations clash against Wales.

The 23-year-old replacement charged towards the Welsh defence in the second half at Stadio Olimpico when his forearm caught Willis Halaholo in the throat.

Although Riccioni’s arm was away from his body, referee Wayne Barnes and his TMO ruled that the initial contact was below Halaholo’s neck and therefore just a yellow card was given to the Benetton prop.

Many fans and pundits appear confused by the decision, suggesting he should have seen red, however credit must go to Riccioni for checking Halaholo was ok and apologising after being sent to the sin bin.

In the end Wales stormed to a 7-48 win, equalling their biggest ever win in Rome, to set up a Grand Slam decider against France next weekend.

So Andy Warwick gets a RED card for exactly the same offence that Riccioni gets a YELLOW card for…..
If anything I thought the Riccioni incident was worse. #consistency 🤷🏼‍♂️

The inconsistencies from RFU referee’s continue.. Marco riccioni sent to the bin for leading with the forearm to the neck of Halaholo, yet Andrew Warwick received a red and a two match ban for the same offence in last weeks Ulster Pro 14 defeat to Leinster. No logic. #ITAvsWAL

Fair play to Riccioni apologising as he receives his yellow card. #ITAvWaL #SixNations

Incredible sportsmanship from Marco Riccioni, still waiting to see a footy player say sorry after getting a yellow card