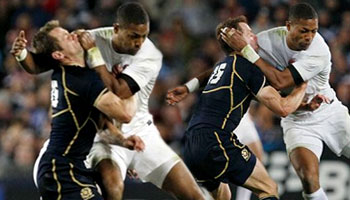 There’s been another suspension in the World Cup, the second for England, as winger Delon Armitage has been banned for one game following a high tackle he made during their win over Scotland on the weekend.

Armitage was suspended for one week following an Auckland disciplinary hearing that was chaired by independant judicial officer Bruce Squire. Armitage pleaded guilty to the charge of a dangerous high tackle. The offence was deemed to be on the lower end, which is usually a two week sanction, but the potential ban was halved after taking mitigating circumstances into account.

Chris Paterson was the one on the receiving end of the tackle which in real time looked fairly innocuous. The vetaran Scotsman was left prone on the floor for a while though, and the replay showed that he felt the force of Armitage’s right shoulder.

Neither the referee or his assitants saw the incident. If they had, do you think it would it have been a penalty, yellow, or red card offence?

The England wing will miss their quarter final meeting against rivals France next Saturday, but will be available again if they make it through to the semi finals. Mark Cueto will be his replacement.

Armitage has 48 hours to appeal the ruling.