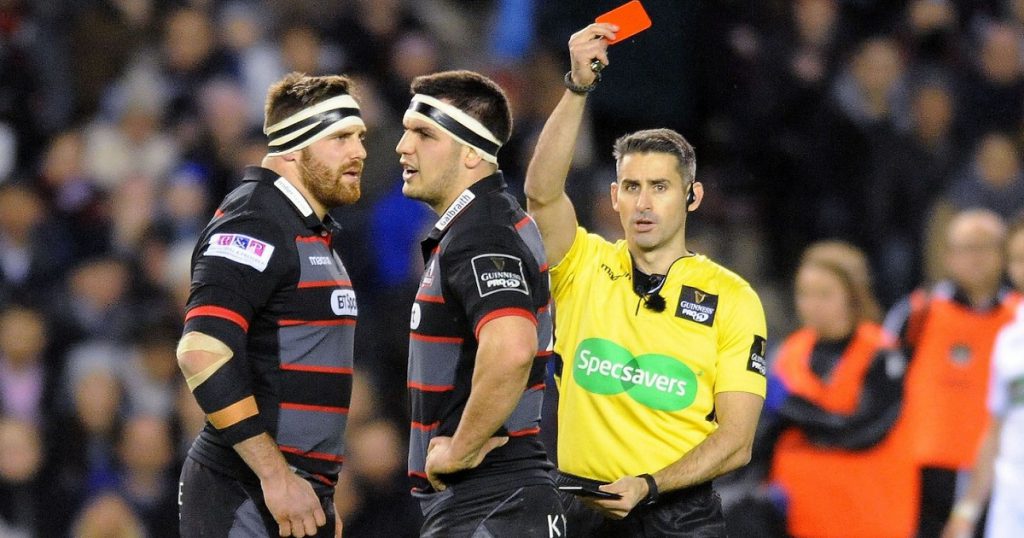 14-man Edinburgh produced the shock of the Pro14 season so far with an incredible last-minute victory over leaders Glasgow at Murrayfield.

The home side had prop Simon Berghan sent off for a deliberate stamp on Fraser Brown’s head after just four minutes, leaving Irish referee Frank Murphy no option but to hand the Scottish internationalist his marching orders.

Despite going a man down for the remainder of the match, Richard Cockerill’s side rallied well in front of a record 23,833 crowd to hand the Warriors their first league defeat of the season, thanks to Chris Dean’s final-minute try.

Prior to Berghan’s dismissal, Edinburgh had been enjoying their first period of possession and territory after falling behind to a second-minute try from Huw Jones.

And while Glasgow’s Brown was clearly on the wrong side of the ruck having made the previous tackles on Cornell du Preez, Berghan appeared to look down towards the hooker and strike Brown’s head with force.

Referee Murphy consulted his TMO Kevin Beggs and both confirmed Berghan’s intent to stamp as well as the action was “serious foul play”, thus warranting a straight red card.

It was the fastest sending off of the PRO14 season so far and Edinburgh’s second, following Michele Rizzo’s red card for a shoulder charge against the Scarlets in September.

That Edinburgh managed to fight back so impressively to win was testament to the defensive effort Cockerill’s side out in on the brink of half-time.

Twice they held up the Glasgow attack over their own line before forcing a turnover with time up.

Glasgow for their part, were poor throughout and although they extended their lead in the second half thanks to Scott Cummings’ try, they were never out of the woods and spurned at least two try-scoring chances that would have buried the match.

Berghan will face disciplinary action from the PRO14 on Thursday this week and will likely cop a ban for his sending off, which may harm his chances of making Gregor Townsend’s Scotland squad for the 2018 6 Nations.