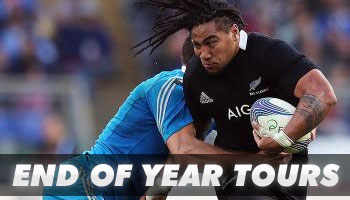 With the seedings draw for the 2015 Rugby World Cup not far off, these Autumn International results are more significant than ever. To make sure you’re up to speed, we’ve archived highlights and full match replays of the main games.

Today the latest IRB World Rankings were released and as you can see below, New Zealand occupy top spot for the third year running, but a little further down we saw some changes as Wales dropped two places following their loss to Samoa.

View the full rankings on the IRB website here

Featuring highlights of all of the weekend’s games wasn’t feasible, so instead we’ve provided a short recap, followed by links to quick highlights and archived full matches.

Elsewhere, Tonga beat the USA 22-13, while Canada beat Russia 35-3. You can view full match replays of those two games on the official IRB website here.

If you spotted anything in particular that you think should be featured on RD, please get in touch by sending a quick message on Twitter, Facebook, or by email.

On a sidenote, our live video stream of the Italy vs New Zealand match was a huge success. The feedback was great and the quality of the video was excellent. If all goes well, we’ll do the same for Italy vs Australia this coming weekend.