'England what have you done': Fans’ reaction to Tompkins' Wales call-up 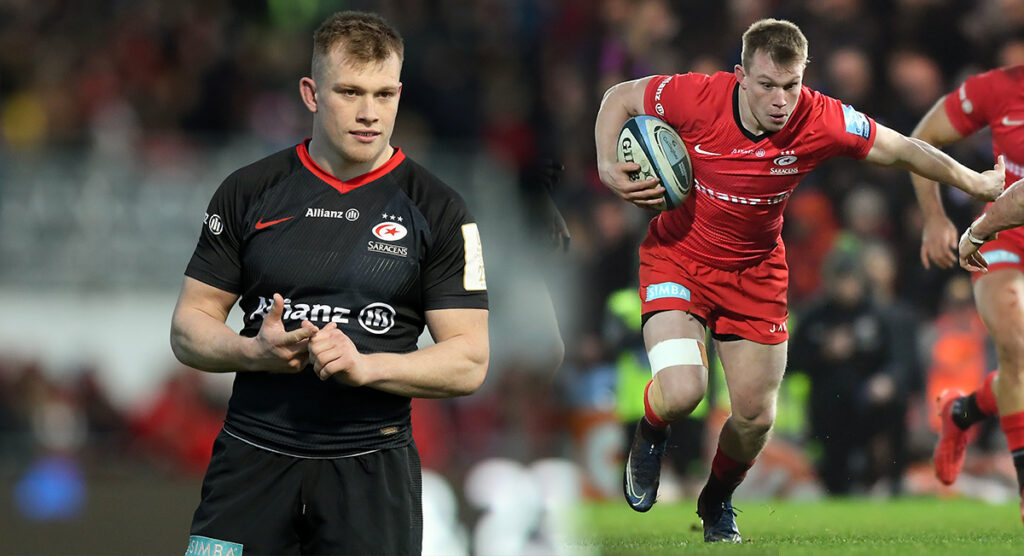 Wayne Pivac has named his Wales squad for his first Six Nations in charge and there are some fascinating and unexpected calls.

In the weeks building up to the selection, a lot of focus had been on 18-year-old Gloucester winger Louis Rees-Zammit, who had surged into contention after being named the Gallagher Premiership player of the month in December.

However, his selection has been eclipsed by Saracens centre Nick Tompkins’, whose call-up has blindsided many.

The 24-year-old comes in during an injury crisis in Wales amongst outside centres, which sees the likes of Jonathan Davies and Willis Halaholo ruled out for the entirety of the Six Nations. This is a selection that Wales have flirted with for a while, and Pivac has taken advantage of that Saracen having a Welsh grandmother, and he could fill a major void in the midfield over the next few months.

This comes as a surprise to many England and Saracens fans, who have thought the Academy product was destined to play for England one day. A world champion with the under-20s, and a former Saxons player, Tompkins was never able to break into Eddie Jones’ team though.

As an England fan, gutted Tompkins has been called up. He's a brilliant centre. If/when he gets game time, Wales fans are in for a treat.

Nick Tompkins … England what have you done. 💔

Brilliant for Nick 👍🏼💪🏼England may just have made a big mistake!

Massive loss for England but a massive gain for Wales. He's some player is Nick!

Many feel that this is a missed opportunity and regrettable mistake by England. Moreover, England’s loss is certainly Wales’ gain in this circumstance, as the centre has all the credentials to play Test rugby.

Tompkins has perhaps fallen victim to the strength in depth England has in the centres, which includes Owen Farrell, Manu Tuilagi, Henry Slade, Jonathan Joseph and previously Ben Te’o, who have been the regulars in the 12 and 13 shirts over the past four years.

Real shame for English rugby that they've missed out on Nick Tompkins. Quality player that could rip it up at international level. https://t.co/Zub5iIceW9

Likewise, the depth at Saracens has meant that Tompkins is not always a guaranteed starter in black, but is still a hugely admired player nonetheless. OptaJonny has revealed that Tompkins has scored the most tries (15), made the most metres (843) and beaten the most defenders (75) for a centre since the start of the 2018/19 Premiership season, which is why Wales have made a very shrewd acquisition.

15 – Since the start of last season Nick Tompkins tops the charts for tries (15), metres (843) and defenders beaten (75) by centres in @premrugby. Selection. pic.twitter.com/WGTT4O9bJL

Tompkins is deceptively hard to put down, which, alongside some searing lines, explains why he makes so much ground and beats so many players. Allied with some deft hands and a brilliant offloading game, Saracens fans have struggled to see why there has been no interest in him from England.

Eddie jones do your job.. you've missed out on very good centre.. wot are you looking at..

England were warned 20 months ago but Eddie Jones did nothing. Tompkins will be a 70-80 cap centre for Wales. As a 12 he's better than Farrell, just doesn't kick goals https://t.co/8GvLfBU7OT

If true, Jones has missed another one here. Tompkins playing outside Farrell would have been fantastic. Shame for England, excellent for Wales. https://t.co/8LrRle5Z6L

Furthermore, it must have been frustrating for the player himself to see many of his Saracens teammates, including fellow centre Alex Lozowski, play for England, while he had not.

Ultimately, as much as England fans may regret this decision, this is a wise choice from a playing perspective, as it allows Tompkins a chance to show what he is capable of on the international stage.

The centre is joined by four other uncapped Premiership players: Rees-Zammit, Sale Sharks prop WillGriff John and Wasps lock Will Rowlands. Scarlets winger Johnny McNicholl is the only other uncapped player in the squad.