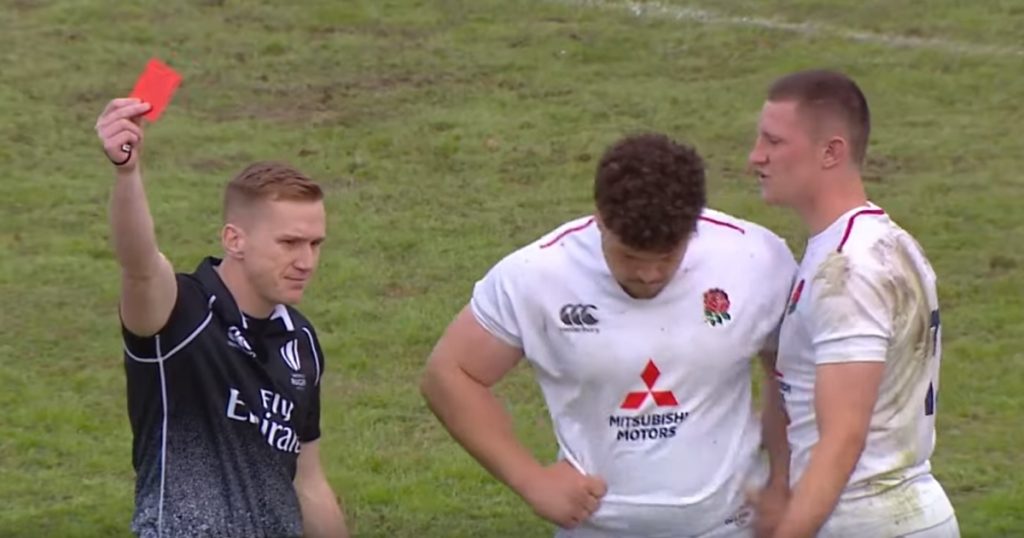 Alfie Barbeary was shown a straight red card for a dangerous piece of play as England were beaten by Ireland on the opening day of the World Rugby U20 Championship in Argentina.

The replacement prop forward could hardly have had any complaints when he dismissed after 66 minutes as he picked up and dropped Ireland flanker John Hodnett.

Ireland were leading 28-26 at that point, with the game very much in the balance. Barbeary’s dismissal, however, opened the floodgates, following two earlier yellow cards for an ill-disciplined English outfit, with the Irish running out comfortable 42-26 victors.

This incident marred what had been a nip-and-tuck encounter, with the sides evenly matched 14-13 at the half-time break. England lost fly-half Aaron Hinkley and Manu Vunipola for dangerous tackles and were made to pay dearly in the end.

Wales also kicked off their championship with a win, beating hosts Argentina 35-20 in Rosario. A pair of Cai Evans penalties and a try from Harri Morgan gave Wales a narrow 11-10 advantage at the break before winger Rodrigo Isgro Alastra gathered a perfect cross-field kick to re-take the lead.

But a try from Ryan Conbeer and more points from the boot of Evans was enough for Wales to banish the demons of an unsuccessful campaign in 2018.

All results from Day 1 of the World Rugby U20 Championship