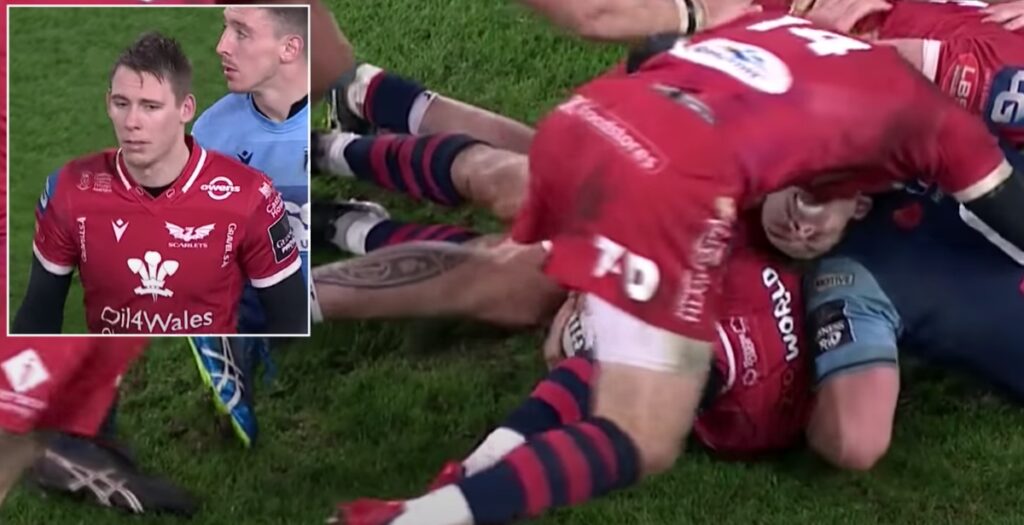 Wales and Scarlets star Liam Williams was shown a straight red card against Cardiff Blues on Saturday for a reckless clearout at a breakdown.

The winger tried to support Leigh Halfpenny at a ruck and made initial contact with the head of Cardiff flanker Shane Lewis-Hughes, resulting in a red card just before half time.

Clearly there was no malice in Williams’ challenge, but given the clash of heads the referee was left with little option but to give the British & Irish Lion his marching orders.

Williams, 31, was clearly frustrated by the decision and was overheard on the ref mic saying: “We’ll start playing touch, shall we?”, and the Scarlets man received little sympathy on Twitter from fans.

The decision against Williams contributed to Scarlets’ 29-20 defeat at Cardiff Arms Park and reduced his side’s Pro 14 advantage over Cardiff to just two points with a game-in-hand. Full match highlights as well as the reaction to the red card are available below:

Once referee Craig Evans went through the framework there, he had no real option but to red card Liam Williams. Reckless entry to the ruck and connected directly with the head of SLH. Ticked the boxes.

Fans complaining about red cards like the one for Liam Williams yesterday.

30 year olds have dementia because of recklessness on the pitch, so if playing for less than an hour without a player eventually means players have a quality of life after the game then so be it.

Liam Williams response to his card:

“Wanna start playing touch is it?”

Red card for Liam Williams on his @scarlets comeback. No sympathy – dangerous head first charge into @cardiff_blues opponent. Lack of intent is irrelevant under law. He got what he deserved. Justice done.

A load of people saying this is accidental. It’s not. Accidental would be tripping over the turf and going headfirst into a ruck.
This is deliberate. Maybe not deliberate to lead with the head, but deliberate to enter the ruck. When you do that and cock it up, a red is possible. https://t.co/78AfqiLo97

On the red card, I still look at it in full speed as a rugby collision, but if you go in at the side with your head in the position Liam Williams’ was and catch an opposition player square on the head then you can’t complain.

Especially if you’ve been a wally all half. #CBLvSCA

A lot of talk about the Liam Williams incident but I have to say, @CraigEvans91 did a great job in the middle last night.

Liam Williams has been pumped up all night, pushing and shoving off the ball.

At best he’s been on the edge, at worst he’s lost control.

Last time I checked touch rugby didn’t involve contact with the head of a player with no sight of the oncoming hit. I’m sure there will be people once again saying “game’s gone soft” but it was a red and hope Liam Williams’ comments to the ref are punished separately @yclwbrygbi

Saw this in real time. I have no idea what Liam Williams is doing there.

SLH is on the floor and out of the game. Could be in trouble.

LW and SLH had words about 15 seconds before.