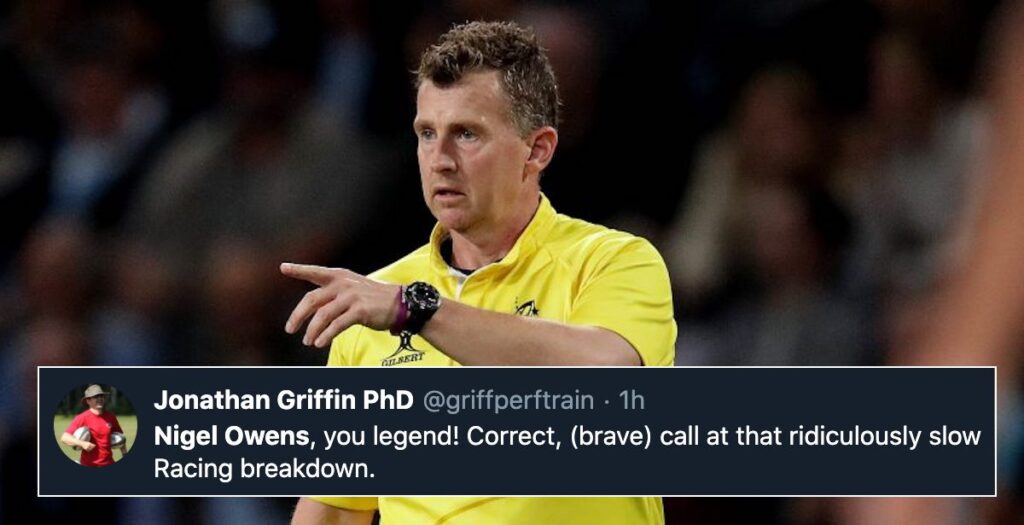 Fans have jumped on Twitter to praise referee Nigel Owens for calling out the Racing 92 scrum half for not using the ball at a breakdown.

The legendary referee gave Teddy Iribaren the call to “use it” and after five seconds awarded a scrum to Saracens early on the Champions Cup semi-final at Paris La Défense Arena.

Fans and pundits expressed sheer delight that Owens had turned over possession for a rule which many feel has been neglected for years.

21 | Nigel Owens awards Sarries a scrum as Iribaren refuses to use the ball having been warned twice.

5m out from the Racing line, a big moment coming up.

Nigel Owens clamping down on go-slow caterpillar rucks will be hard to beat as a highlight of this Euro semi-final weekend. #useit

In love with that from Nigel Owens.
Asked to use it 3 times.

There was a ref who did London and SE games 5/6 years ago – he still might – who used to give a feeding free-kick at the first scrum of *every* game no matter how straight the put-in was. That ‘use it’ call felt a bit like that.

You just love to see the “use it” call followed up on. Well done Nigel Owens.

Massive shout out to Nigel Owens for calling and applying the « use it ». Miracles do happen 😆