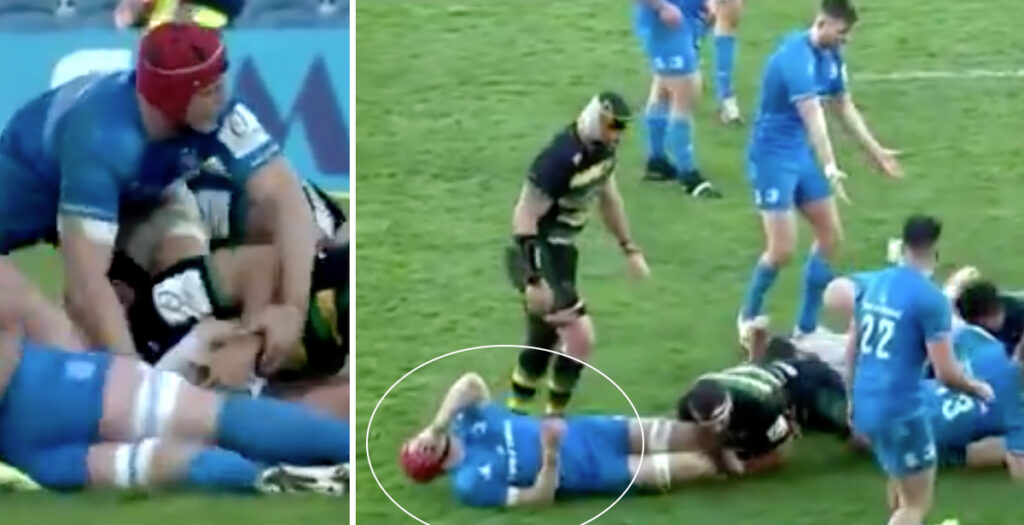 Fans have questioned the controversial decision not to penalise Northampton Saints flanker Tom Wood for a dangerous clear out on Leinster’s Josh Van Der Flier on Saturday.

Wood made direct contact with Van Der Flier’s head at a ruck, leaving the Leinster flanker rolling round on the ground in pain during the final 10 minutes of the Champions Cup clash in Dublin.

How do I explain to my grandchildren that this wasn’t a red card for Tom Wood? 😳 pic.twitter.com/NwQ73Zad1u

Following advice from the TMO, referee Pierre Brousset consulted a monitor on the side of the pitch at RDS Arena and decided there was no foul play at the breakdown, however fans and pundits have disagreed with the decision.

Leinster won the game 35-19 leaving them top of Pool A in the competition and some of the reaction to Wood’s challenge is below:

Is the Brian O’Driscoll currently defending Tom Wood’s right to smash Van Der Flier in the head at the ruck on BT Sport the same BOD who spoke three days ago about the duty of ex-players and pundits to change the way they talk about these incidents given the CTE lawsuit?

The refereeing in the #LEINvNOR game has been inconsistent at best! Tom Wood should have been sent off and then the Leinster player should have been sin binned for a late and high tackle just now! @btsportrugby

@jamieheaslip we’re do you suggest tom wood hits the defender at that Ruck then. Generally intrigued… no foul play from the referee so just wondered 👍🏻

Tom Wood’s mate Jim Hamilton says it should’ve been red. Lots of fairly conflicting and confusing opinions from ex-players on the commentary team 🤔

Think Tom Wood is lucky there, but I think his angle of entry into the ruck was what caused the problem. If he had entered from the hind most foot I think he has a better chance of finding a lower contact point #LEIvNOR

Quinny: “Not alot Tom Wood can do”

@CharlieFelix …and how is Tom Wood still on the field? Surely the debate is Yellow or Red – not whether it’s a legitimate ‘rugby incident’?

Commentary and ref’s call completely wrong there. “Nowhere for Tom Wood’s shoulder to go”. How about he doesnt make shoulder contact with the player’s head? Are we not in the midst of a brain damage in rugby scandal? #LeinsterRugby #northampton #ChampionsCup

This Tom Wood clear out is going to be a talking point, looked like a red but can he do anything else ?? #LEIvNOR

It nearly 15 weeks ago - an October 10 semi-final vs Bristol - when powerhouse midfielder Malakai Fekitoa was last seen in action with Wasps.