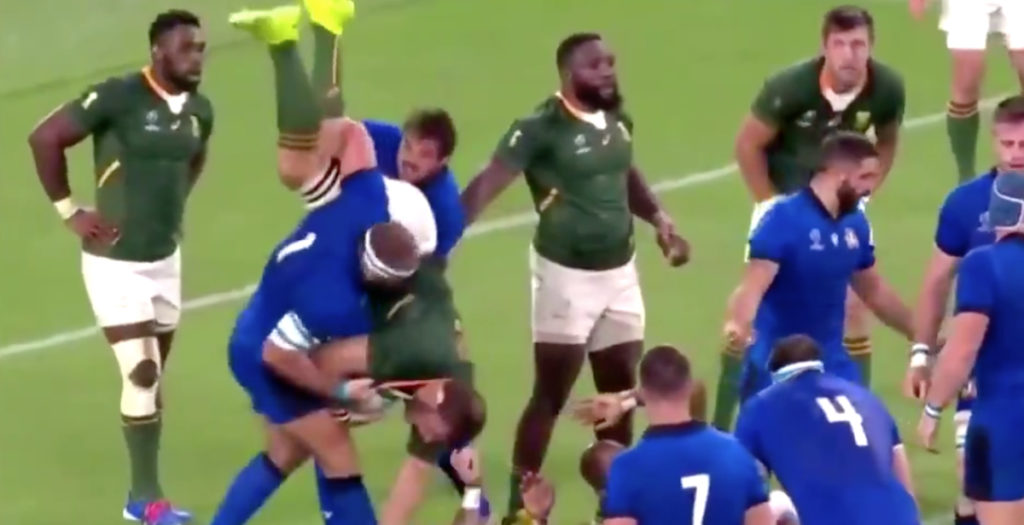 Italy prop Andrea Lovotti received a red card on Friday for a nasty tip take on South Africa number eight Duane Vermeulen but fans are now questioning why only one player was sent off.

Fellow Italian prop Nicola Quaglio was also involved in the tackle, which saw Vermeulen land on his head shortly after the half time break.

So do we think this should have been 2 red cards for the Italians as they both look to blame to me with equal force? pic.twitter.com/zbUL2UT0fz

World Rugby has since announced that both players will attend a disciplinary hearing in Tokyo on 6 October.

The Springboks scored a further five tries following Lovotti’s departure and the game ended 49-3 to South Africa. Full match highlights and reaction to the incident is available below:

Can anybody even explain to me why Lovotti even needed to make that tackle? I’m pretty mad as a South African, but I’d be absolutely livid if I were Italian. #RWC2019 #Springboks #RSAvITA

Both Andrea Lovotti and Nicola Quaglio have been cited for the double-tackle on Duane Vermeulen yesterday that resulted in Lovotti being sent off. Conor O’Shea admitted after the game he thought it might be double-red after seeing the replay. #RWC2019

“It could have easily been two red cards.” – @dallaglio8

Was Nicola Quaglio luck to have escaped a red card?#RSAvITA #RWC2019 pic.twitter.com/DY3p7UDqgA