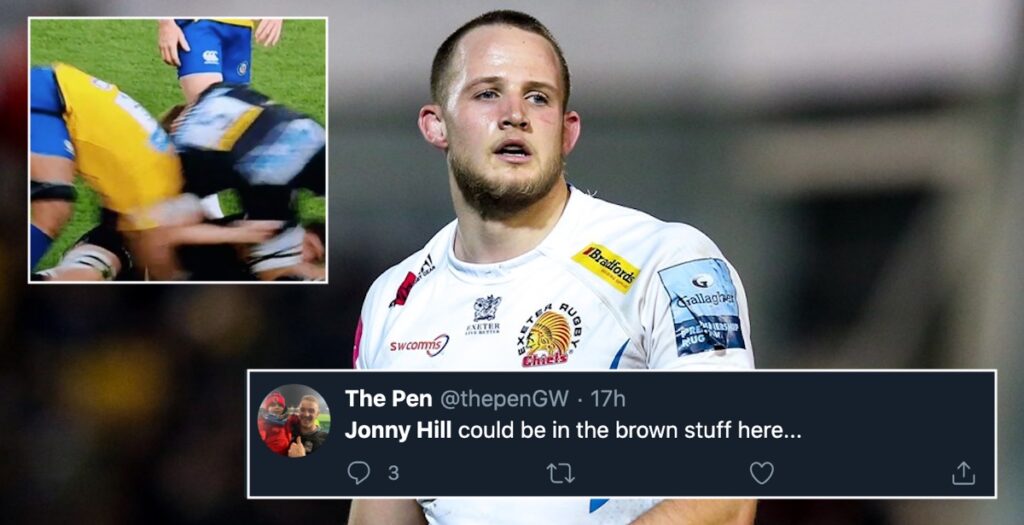 Opinion is split over the yellow card shown to Exeter lock Jonny Hill during Saturday’s Premiership semi-final against Bath.

The 26-year-old was sent to the sin bin for clearing out Welsh international Taulupe Faletau at a breakdown without using his arms just before half time.

The decision has divided fans with some agreeing with the yellow card decision and others suggesting that Hill should’ve been shown red for the incident.

This is apparently NOT contact with the head. Ridiculous. #EXEvBAT pic.twitter.com/btFDZf5Ufe

At the time Exeter only had an eight-point lead and a red card could have given Bath an opportunity to reach the Premiership final, however Hill returned to the action five minutes after the break and helped the Chiefs to a 35-6 win at Sandy Park with a try of his own. Full match highlights are available below:

Luke Pearce has some nerve telling Bath players “Let us do our job”. Totally ruined this game as a spectacle with that shocking decision not to sent Jonny Hill off

Jonny Hill should play for England. Even though it was illegal – the brutality of that clear out on Faletau is a reason why. #EXEvBAT

34 | Jonny Hill is in the sinbin. Horrific ‘clear-out’ at the ruck. Priestland kicks into Chiefs territory

I think Jonny Hill is fortunate. I think the group of officials are some of the best. It glanced the head, which catapulted Faletau’s head down. Still respect the decision, but it could easily have gone another way, and that is an element of his game that Hill needs to work on

That should have been a red.

If Exeter were a smaller team it would have been red.

Luke Pierce bottling the obvious red card Jonny Hill. Bottling at least a card initially and only giving a peno, then upgrading it to only a yellow when its clearly neck contact. Why the upgrade to yellow if its still effectively what he thought he saw first time round? #EXEvBAT

If Farrell did this, people would be calling for a lifetime ban… I love Jonny Hill and think he should partner Itoje in England’s 2nd row, but I’ve never seen such an obvious red card/ban worthy offence that would’ve changed the semi-final. #RefBottledIt #RedCard pic.twitter.com/vtWkEhY5ft

Nailed on yellow for Jonny Hill there. Lazy hit with absolutely no attempt to wrap which looked very uncomfortable, but contact was on Taulupe Faletau’s back rather than the neck. Fantastic officiating. #EXEvBAT #GallagherPrem

Disgusting call from Pearce. How the heck isn’t that a red card against Jonny Hill… anymore pressure and he would of snapped Falateau’s neck. Where’s the player welfare !? @jollygibbo #EXEvBAT #GallagherPrem @btsportrugby

It was a yellow but its a contact sport, he was trying to clear put the player not injur him, officials made the right decision and no more action will be taken.