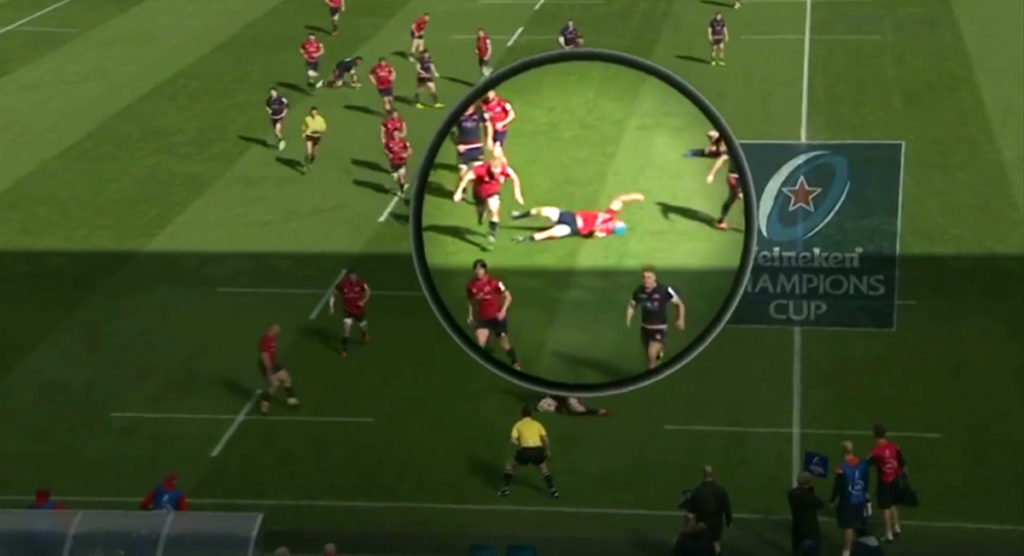 The weekend’s rugby provided a lot of topics for debate, none more so that Munster’s winner against Edinburgh at Murrayfield. The European giants had a penalty against them reversed, after Edinburgh prop Pierre Schoeman made contact with Tadhg Beirne off the ball.

From what could have been a chance for Richard Cockerill’s side to extend their lead, Munster took advantage, and Keith Earls eventually scored the match-winning try.

However, Beirne’s theatrics have come under some heavy criticism in the wake of the game on social media, as the Irish second-row seemed to go down with minimal contact. Worse still, he remained down, drawing attention to what had happened, and went on to finish the game.

As expected, many fans and players were disappointed by these antics, as David Flatman even called for the lock to apologise.

So Jacob Stockdale apologised for his error. Feel sorry for the bloke. But has Tadhg Beirne said sorry for diving yet?

Fans have shown their support for what Flatman said, as diving is becoming more commonplace in rugby. This is what the fans have been saying:

100% with you on this Flats. Diving should be highlighted, ridiculed and the players doing it should be shamed into desisting. Absolutely unacceptable with no place in rugby, yet has become too common lately.

And so diving creeps into rugby… https://t.co/xFMpJ9YHJX

Rivaldo would have been proud.

A fair comment. We don't want that nonsense in rugby.

Embarrassing , oscar worthy dive by @longdogbeirne . Should be banned for the semi-final .

I agree, the last thing we need is diving in rugby. I don’t agree with what he did, I’m just interested to know, is it a penalty if he blocks him by Beirne stays on his feet?

Sean O’Brien did a similar thing in the 6 Nations. Rugby is becoming like football when it comes to diving to milk penalties and needs to be stamped out early

Excellent analysis on it although I think your pulling your punches, we all hate diving in football and we need to call it out and expect it to be dealt with in rugby.

Of course, not many people are arguing that this was not a penalty, as after all, this was a needless and unwarranted dig by Schoeman off the ball. However, while many fans will oppose what Schoeman did, many more will have a problem with Beirne’s antics to milk a penalty.

If rugby players are going to start diving like footballers, the sports ruined.

That is what makes this a peculiar circumstance, as the referee was right to award Munster a penalty, but equally Beirne should be admonished for what he did.

“If he’s your team-mate, you go ‘thanks for milking us the penalty’ and if you are looking from outside you go ‘come on, get up’ and in the words of Nigel Owens, ‘this isn’t soccer, lads’,” said Brian O’Driscoll on Monday’s Off The Ball.

Rugby has always seemed to pride itself as being immune from acts of cheating like this, but it is undeniable that it is becoming more and more prominent, particularly with the availability of the TMO. Obviously, football receives a fair amount of criticism for the frequency of diving, and many will be desperate to prevent rugby going down the same road.