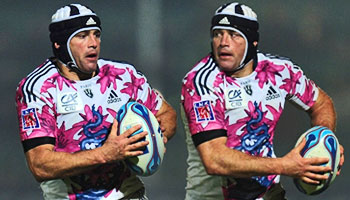 Stade Francais’ Felipe Contepomi had an interesting night on Thursday, as while he played a huge part in a fantastic comeback against Worcester, he also got smashed almost every time he touched the ball. Here’s a quick look at some of those tackles.

The brilliant Argentine was an integral part of a come-from-behind win that saw his side bounce back after trailing 14-0, to come out eventual 23-14 victors in the Amlin Challenge Cup.

The Pumas skipper kicked six penalties for a personal tally of 18 points to add to the try by Paul Sackey. Despite the home side outscoring the French visitors by two tries to one, the experience and patience of Stade proved too much for the hosts. Contepomi was named Man of the Match.

“In the first half we were slow off the blocks and maybe we tried to play a little to much. But at half-time we said we needed to do much of the same but with a little more pace and energy and things got better,” said Contepomi.

“It was a good second half display, especially as it was our first away win of the year. Its good momentum going into next weekend’s European game and good for us in the French league as well. We will take it step by step, but it’s a great win and its good to win away,” he added.

While he was doing everything right in terms of controlling the game, the sideshow was that on numerous occasions he was a magnet to the big tackling Worcester side, who ploughed into him at every opportunity, driving him back and dumping him on his rear end more often than not.

Keep an eye out for a neat backflip from outstanding number eight Sergio Parisse, and also the handbags that came from that last big hit on Pumas captain Contepomi.

We’ll have Heineken Cup tickets up for grabs shortly! Make sure you follow RD on Twitter and Facebook so you don’t miss out on the notifications and details regarding how you can win.