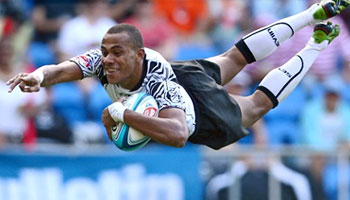 Both teams had young sides in the Cup final, with Fiji fielding seven debutants while New Zealand were missing some key players due to the ITM Cup. The defending champions came out on top again though as their blistering speed and outstanding finishing proved the difference.

“I’m so proud of the boys, they did so well this afternoon,” said Fiji captain Levani Botia.

Argentina beat France 14-7 in the Plate final, while Spain beat England for the first time in the Bowl, avenging their day one loss with a 19-14 victory. Scotland thumped the USA 40-5 to win the Shield.

With the Cup Final win, Fiji collect 22 series points to top the table. New Zealand are behind them on 19 points, while South Africa and Kenya are on 17 and 15 points respectively.

Below are two videos, featuring Day 1 highlights first, then Day 2 highlights will follow. You can also navigate directly to Day 2 – which features all the finals – by using the ‘Next’ button on the player.