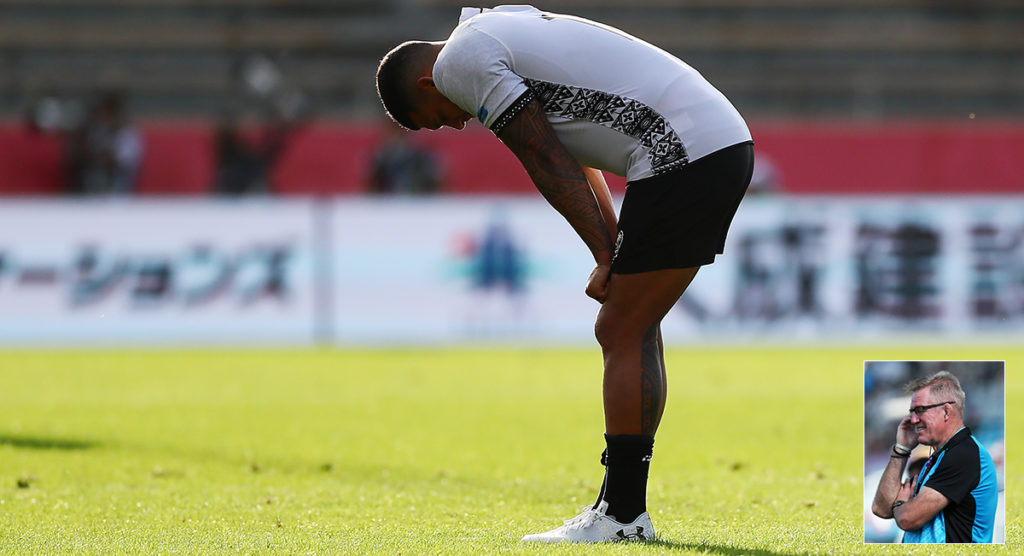 Fijian rugby fans have turned on head coach John McKee on social media after his side were upset by Uruguay on Wednesday at the Rugby World Cup.

After losing to Australia last Saturday, Fiji were shocked by an impassioned Uruguay side, who took a 24-12 halftime lead and managed to hold on for a 30-27 win.

Boasting some world class players, Fiji were tipped by many to cause some upsets at this year’s RWC with the Wallabies and Wales also in their pool. However, their chances of progressing to the quarter-finals now look very slim.

A lot of the blame has fallen on McKee after the result, as he opted to make twelve changes to the starting XV that looked very dangerous against Australia. His side were leading the Wallabies at halftime at the weekend, although Michael Cheika’s side did pull away at the end, but Fiji simply did not turn up against Uruguay.

In light of the result, McKee has been lambasted for making as many changes as he did. Unfortunately, Fiji only had three days off between matches, which is hugely taxing on the players and means changes must be made. However, the volume of changes is what many fans are not happy about, and it perhaps shows that Uruguay were underestimated.

However, McKee has also been criticised for the changes that he made during the game, which seemed to lack any urgency despite Fiji being in a perilous position.

While it is always a tough ask for any coach to select a team after such a short turnaround, fans are now calling for the New Zealander to be sacked. He has been in the role since 2014 and has built a side that have had some impressive results over the years, including beating France in 2018, but Fiji’s hopes of doing anything special at this RWC are in tatters, and the fingers are being pointed at the coach.

Guess McKee better start packing. There is No way he will still have his job after the World Cup. The Fiji public are brutal after a loss like today… Congratulations Uruguay, you clearly wanted it more 👏

John McKee's gamble of fielding a second-string side doesn't pay-off as Uruguay claim the first major upset of the #RWC2019. Fiji's qualification chances hanging by a thread #FIJvURU :

Is this a bad dream? WTF @fijirugby @fijivillage @fijitimes Please retire now Josh Matavesi @theflyingfijian coz you were just trash and wtf was funny about missing kicks..John McKee you need to go…

Fiji now have eight days to prepare for their contest against Georgia, and then have six days before they play Wales in the final game of the pool.

They will need to win both of those games if they are to stand any chance of making it out of their pool, but they will still be dependent on other results going their way in what may prove to be a disappointing RWC campaign.