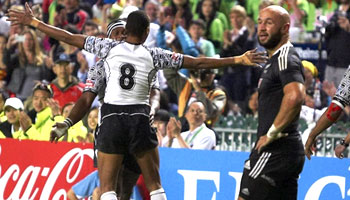 Fiji beat New Zealand 35-28 in a thrilling Cup final to win the 2012 Hong Kong Sevens tournament, moving them within a few points of the overall HSBC Sevens World Series leaders. Today we’ve got highlights from each day’s play, including the final itself.

A high scoring final produced some incredible rugby in what was arguably one of the best games seen at the tournament. Fiji took their 13th Hong Kong title, and started the final impressively with two early tries. New Zealand came back in typical fashion, setting up a grandstand second half.

The Fijians did the same after the break, as they scored twice early and couldn’t be caught, despite a Bryce Heem effort that put New Zealand back in touch. Waisea Nayacalevu settled matters though with a quick return try, before New Zealand scored a consolation try on full time.

“I think we wanted it more than New Zealand in the last ten minutes,” said Fiji coach Alavereti Dere, who now has the honour of having won the tournament as both a player and a coach.

South Africa scored four tries to beat England 28-0 in the third place game, and they stay third on the table with 93 points, behind Fiji on 109, and New Zealand on 111.

In other big news from the tournament, Canada, Spain, and Portugal have all qualified to take part in the entire HSBC Sevens World Series next year.

Below are three videos posted as a playlist. The first is of Day 1, then Day 2, then it’s the final day. You can hit play once to watch them all, or skip straight to the final using the player controls.

Mobile users: If you can’t view the playlist above, view it here