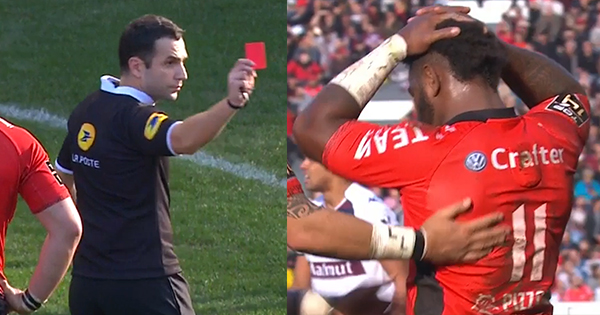 Certainly no stranger to the highlight reels, Toulon winger Josua Tuisova found himself on the opposite end of the spectrum this past weekend after an extremely dangerous tackle on Bordeaux-Begles’s Blair Connor.

The high tackle occured in the 33rd minute of their Top 14 clash as Bordeaux looked to attack out wide with the extra man in Connor. Tuisova was having none of it and came streaking in for the diving, around-the-neck tackle.

Thankfully, Connor was able to get up and it appears he’s lucky to still have both knees intact.

To the surprise of no one, Tuisova was indeed shown a red card and his day was over. Perhaps some time away is also still a possibilty, as a disciplinary hearing with the LNR may follow.

Toulon were well in front 26-0 at the time of the incident and eventually won the match 36-12, with tries from Tuisova, Chris Ashton and two from the big tackling Semi Radradra.