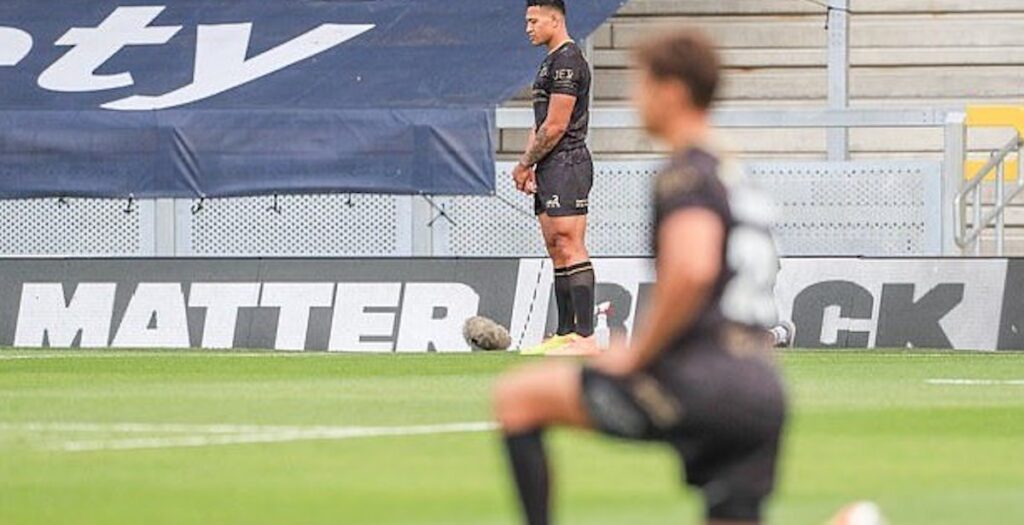 Catalans Dragons player Israel Folau sparked fresh controversy at the weekend after deciding not to take a knee in support of the Black Lives Matter movement.

The 31-year-old former Wallaby was the only player from the Dragons and St Helens not to make the gesture in support of the movement ahead of the Super League clash at Headingley.

“As a group of players and coaching staff, we spoke about it in depth and as a club we are completely against racism and all for equal opportunity,” he said.

“But there were some players and staff who made the decision not to take the knee. That was based on personal choice, they have their own reasons for doing that, and we decided we would respect anyone’s personal choice on the matter.”

The incident has split opinion among rugby fans around the world.

It is, of course, Folau’s absolute right not to “take a knee” with the other 25 players.
It still takes my breath away regardless.
Seriously, Israel?
The downside of expressing solidarity with a movement that believes we are all equal, & deserve equal treatment would be . . ? https://t.co/TD60J7G1HL

@RitaPanahi I do respect Israel Folau for not kneeing during the anthem.

Lefties: We must celebrate diversity in society.

Lefties: How bad is Israel Folau for not being into conformity.

Well done Israel Folau. BLM is a Marxist and racist organisation. Shame on you Super League for getting sucked into this nonsense. All lives matter.

So Israel Folau refused to take a knee in support of #BlackLivesMatter pic.twitter.com/D5T6txhWwB

Another Lion among Sheep as #RugbyLeague star #IsraelFolau decided not to bend the knee to a Marxist, far left Fascist organisation in #BlackLivesMatter ahead of his return to action in the Super League with the Catalan Dragons.

Maybe ask Israel Folau why he didn’t take a knee and not assume. I could guess why. NBA coach Gregg Popovich didn’t kneel recently during the anthem though has been a supporter of African American rights for years#SuperLeague #RugbyLeague