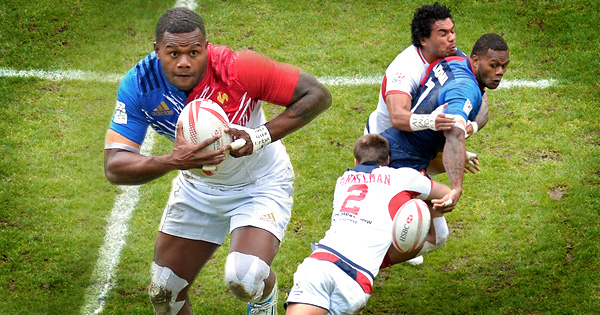 Virimi Vakatawa has had a stunning World Sevens Series so far and it continued in front of a home crowd at the Paris Sevens this past weekend, as the French flyer picked up a spot in the Dream Team, as well as claiming the DHL Impact Player award.

Vakatawa was at the fore as France won the third-place playoff against Argentina, scoring six tries during the tournament as well as making 28 carries and producing 10 offloads.

The Fijian-born flyer now has 58 tries in just 77 matches and is playing so well that the French national team actually picked him for the Six Nations, despite not having played a game of 15s in over two years.

France themselves have had a mixed time of it during this year’s circuit and are currently 10th in the standings; putting in top performances in Cape Town and Singapore, but struggling in Sydney and Hong Kong.

Fiji’s 166 points are helping them currently lead the standings, with South Africa and New Zealand sitting below them in second and third respectively. Last weekend’s shock winners Samoa are currently eighth.

Vakatawa, who also spoke to CNN before the Paris Sevens, reportedly turned down contracts from Toulon, Stade Francais and former club Racing Metro after the Six Nations so that he could stay centrally contracted to France and play on the Sevens circuit.

As you will see in this edit from Paris, when the 24-year-old winger isn’t scoring incredible tries, he’s usually setting them up for his teammates with brilliant stepping and offloading.

– Highlights from the Paris 7s

Here are Vakatawa’s highlights from Paris, as well as his interview with CNN below that.

Looking to finish their inconsistent Super Rugby Pacific season on a high, Melbourne coach Kevin Foote says his team can take a lot from the Waratahs of 2022.