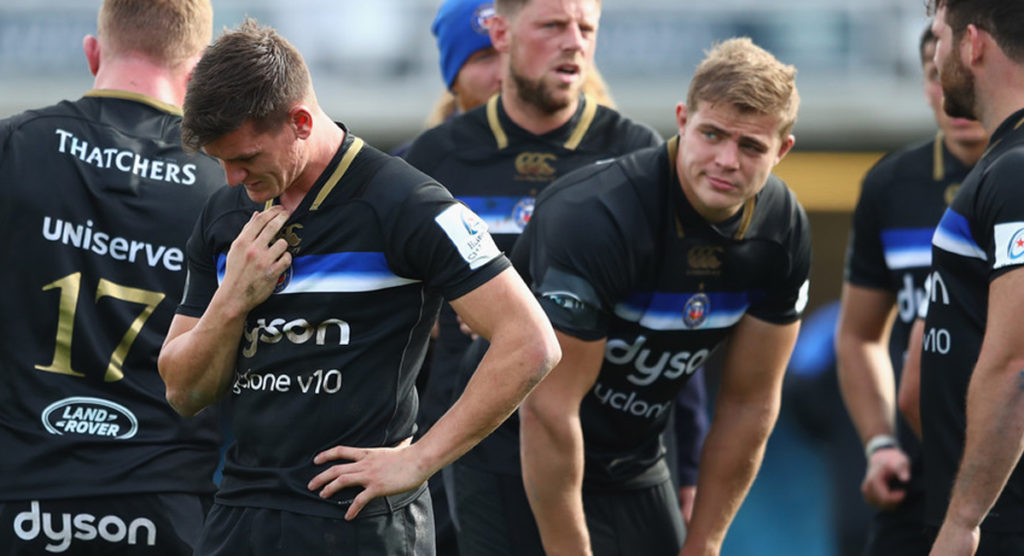 Bath fullback Freddie Burns had an absolute nightmare ending to today’s Heineken Champions Cup clash against Toulouse. In the final minutes and with two clearcut opportunities to win the match for his team, everything went horribly wrong.

After Toulouse came back into the game, the scene was set for a great win when Bath were awarded a penalty ‘smack bang in front’ with less than 8 minutes left in the game. Burns had an easy chance to take the lead and perhaps keep it. All he needed to do was slot the kick.

He definitely got the kiss of the death from commentator Miles Harrison, who painted a picture that included Burns first falling in love with the game, and Bath, and a young age.

The kick bounced back in field off the post. But it wasn’t over yet.

Burns then broke the line shortly afterwards, for what was a classic redemption story and his moment to give his team seven points as he strolled under the uprights, smiling with a huge look of relief on his face.

Up stepped Maxime Medard, the ultimate party pooper. His part in the story should not be overlooked, as he brilliantly never gave up and put in that extra effort late in the contest to slap Burns’ hand, spilling the ball that he so casually held.

Burns didn’t get a third chance, as he was then substituted, having to leave the field with his head in his hands and resign himself to a seat on the floor on the sidelines.

Love this sport for the highs and the lows. Today was an ultimate low and a mistake I’ll learn from. I’ll continue to give my best as I always do. Lastly just apologies to the boys and the supporters for the mistake. I’ll bounce back… thanks for the support 👍🏼

Bath director of rugby Todd Blackadder later said that he pulled Burns from the park because he could see that he was all over the place mentally.

“It’s just an honest mistake, and he will never do it again. You just can’t [celebrate early] at any level. But it’s a genuine, honest mistake,” said Blackadder.

“I don’t feel sorry for him. Somewhere in my soul there is a minuscule bit of empathy for him.. The kick in front of the posts was easy enough for a man of his talents, and getting the ball knocked out of the hand is unforgivable.

“As a fly-half [fullback vs Toulouse] you should have sense of everything around you. Rather than thinking it’s done and dusted, he’s been made a little bit of a fool of.”

Burns had scored a try earlier in the match but it’s this missed opportunity that Baths fans, in particular, will never forget.