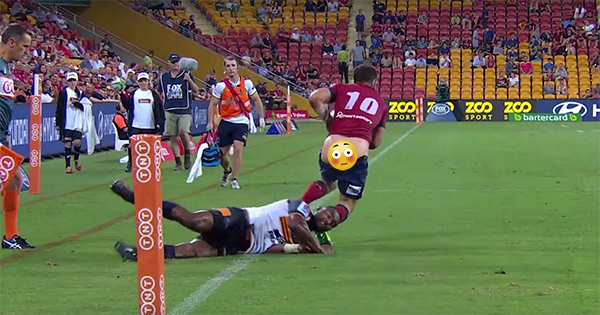 The Reds scored their first Super Rugby victory of the new season by beating Australian rivals the Brumbies 18-10 in Brisbane. But the highlight of the game came from home side Jono Lance, when he nearly bared all for the crowd in attendance.

With the Reds leading 6-5 at the time, the Brumbies looked to get back on the front foot with a deft chip ahead, sending the home side into desperate defence.

Lance made a superb pick-up and immediately looked to counter down the blind-side.

Brumbies and Wallabies centre Tevita Kuridrani scragged Lance by the shorts, which inevitably came down much to the amusement of the fans and commentators alike.

Disappointingly, Lance attempted to pull up the shorts instead of concentrating on his promising counter-attack. The Brumbies defence were alert enough to make the tackle on the fly-half to keep the pressure on the Reds.

Earlier in the week, Lance re-signed with English Premiership side Worcester Warriors, having been loaned to them by the Reds in October. He played eight times at Sixways but suffered a broken hand in December.

Lance gets more than he bargains for in counter attack