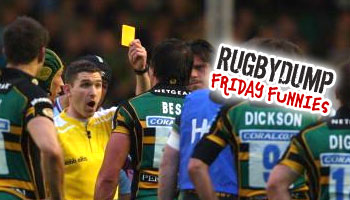 Irish referee George Clancy had his hands full last weekend as he had the honour of refereeing the tempestuous European Challenge Cup final between the Northampton Saints and Bourgoin.

As featured throughout the week here on RD, the match was incident packed with Clancy having to dish out two yellow cards and a red as scuffles broke out at regular intervals.

He took a bit of criticism for the way he handled the fiery contest, and you could see that players on both sides were frustrated at some of the decisions at times.

Clancy got in flanker Neil Bests way at one stage, to which Best didnt take too kindly as he gave Clancy a shove out the way.

Note how he tossed the ball in his direction too, after the pass to him was called forward. Was it aimed at the player who dumped him to the ground, or at the ref himself? Either way, it was funny to see how he wasnt too concerned about barging him out of his path.

A few minutes later, Clancy had no hesitation in yellow carding him for his part in a scuffle.