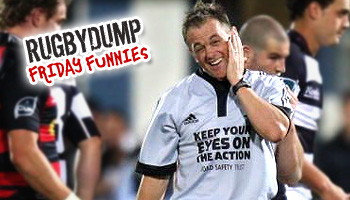 On Thursday night Napiers McLean Park the top of the table clash between Hawkes Bay and Canterbury ended with a more than controversial refereeing decision. This incident, about 20 minutes earlier, might have been to blame.

It was a thrilling, high quality match that contained all the intensity and drama of an Air New Zealand Cup classic, the defending champions Canterbury snuck home 27-20 thanks to a late try by Dan Carter.

Canterbury had 10 All Blacks back in their side, including Carter and Richie McCaw. They outscored Hawkes Bay three tries to one, but the match was a closely-fought affair, which ended in controversy as prop Sona Taumalolo dived for the corner in injury time.

Referee Chris Pollock didnt award the try though, which perhaps came from a delayed concussion after this massive collision he had with Sean Maitland earlier in the match.

Its not really a funny, but its worth watching as its possibly one of the biggest ref collisions weve seen before.

“That’s the hardest I’ve been hit in a Cup game and I felt it when I hit the ground,” said Pollock afterwards.

Keep your eyes on the action, ref.