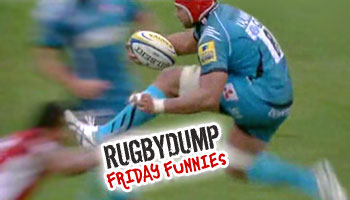 Whether it’s a strong hand-off, sidestep, or raw speed, there are various ways to beat a tackler. Gloucester number eight Sione Kalamafoni had another idea last weekend against London Welsh, but it didn’t go down too well with the official.

The big Tongan loose forward’s human hurdle attempt was executed perfectly. The problem was execution is exactly what could have happened, as his flying boots came pretty close to taking out at least one of the opposition players.

Most of the time when this happens a penalty is the result. Shane Williams got away with side-step-jumping once, but on this occasion referee Llyr Apgeraint-Roberts ruled against it.

“You cannot jump over a tackle.. you run, don’t jump,” was his explanation after seeing London Welsh scrumhalf Tyson Keats’ flailing arms in an attempt to tackle the flying forward.

Is jumping into/over a tackle illegal in terms of the law?

Not specifically, but it’s dangerous for both the jumper and those around him. Law 10.4 covers Dangerous Play, with section (k) covering “Acts contrary to good sportsmanship.”

It states that a player must not do anything against the spirit of good sportsmanship. So while jumping into a tackle isn’t categorically covered, it is down to the referee’s interpretation of what is seen to be dangerous, and he is entitled to penalise it if he feels player safety was compromised.

Ten points for the effort from Kalamafoni anyway.