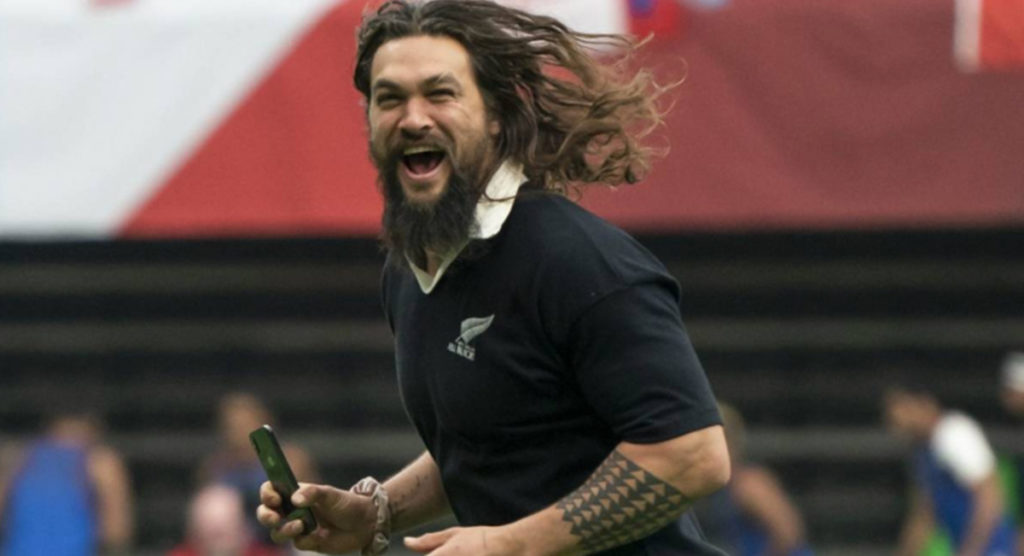 Jason Momoa’s appearance at the Vancouver Sevens created a buzz throughout the rugby world over the weekend. The Aquaman and Game of Thrones star made it perfectly clear who he was there to support and much of the talk centered on his vintage jersey. And he’s since cleared up who it’s from.

You may have seen footage of Momoa’s big smile and sizable frame in the stands in Vancouver. He, along with felow actor Patrick Warburton, caused quite a stir as the Sevens action went on, including a brilliant piece of footwork for an amazing try.

A quick glance at Momoa showed the number 8 on the back of his vintage, legit looking All Blacks jersey, leading many to ask how he got it and to speculate that it could have once belonged to greats such as Buck Shelford, Gary Wheaton or Zinzan Brooke.

Momoa has now explained just how he ended up with the vintage piece of kit, telling allblacks.com:

“It was a gift from my stuntman Glenn Ennis about 15 years ago when I was on Stargate Atlantis. He was captain for Canada and played against the All Blacks at the 1991 Rugby World Cup where he traded jerseys with the legendary Zinzan Brooke,” Momoa said.

“It is one of the greatest presents I have ever been given. I never leave home without it. It always travels with me.”

So here is a look at number eight Brooke wearing that very same jersey, when he scored a try against Canada in 1991.

The Hawaiian-born Momoa is no stranger to the Haka. Millions of fans have already seen viral videos of him leading a Haka before showings of his blockbuster Aquaman.

The most dramatic example is when the action star performed this Haka for Mark Hunt with Auckland’s UFC team.