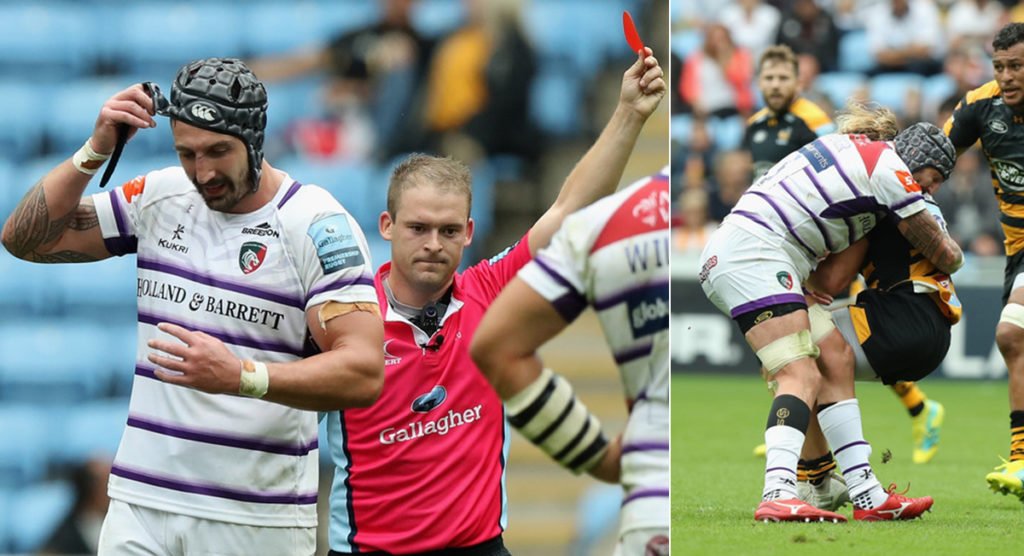 Leicester Tigers coach Geordan Murphy has said that rugby has “gone too PC” after second rower Will Spencer was sent off for his challenge on Wasps hooker Tommy Taylor. A man up, Wasps won the match 41-35. Spencer will face a disciplinary hearing this week.

Spencer made the high tackle shortly before half time in the eight-try contest, incensing new coach Murphy as well as captain Tom Youngs, who could be heard saying “Rugby’s changed” just after the red card was shown by referee Ian Tempest.

Despite having some time to cool down, Murphy then followed up with a post match interview on BT Sport where he said “I think the games gone a little bit too PC” [politically correct] and touched on the fact that Spencer is extremely tall and struggled to get down that low to make a legal tackle.

He said that his ‘solution’ will be to pick players under five foot, which will make it very difficult to referee.

“I think the game’s gone a little bit too PC.”

Geordan Murphy is not having the Will Spencer red card… 👀#GallagherPrem pic.twitter.com/9SaVLa4UTT

According to the laws right now, the decision appeared to be correct, as Spencer’s shoulder did hit Taylor’s face. Intent does not come into the equation.

The Tigers lock will have to face a disciplinary hearing in Bristol on Tuesday evening.

In the UK, you can see the full incident here. Non-UK viewers can see it in the highlights wrap below

🗣 “We have a responsibility to tackle low.”

Will Spencer was shown a red card for a high tackle, but not everybody agrees…

We haven’t heard the last of this one 👀 pic.twitter.com/ynedwRAflU

Wasps coach Dai Young had sympathy for Spencer, but felt it was the correct call.

“We’ve had the directive that any tackle direct to the head is a red card. It’s harsh and I’d have been disappointed if it was on our side, but I totally understand.

“I don’t think it’s something the referee should be criticised for. If it was a yellow card I wouldn’t have complained about it. I hope the player doesn’t get banned for it. It’s difficult to get that 100 per cent right every time.

Below are the full match highlights, including the incident (at 1:07)