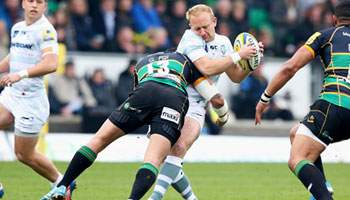 Shane Geraghty had an eventful game on his return to Franklins Gardens. Geraghty, who left Northampton Saints for Brive in 2011, was smashed by centre George Pisi on more than one occasion, but soldiered on to put in a gritty performance.

London Irish looked dead and burried as they trailed 29-0 after 58 minutes, but three tries gave them hope, with skipper Geragthy scoring the second as part of a valiant fight back.

They got within 8 points but a late Saints try sealed the result, with the home side winning 36-21.

“Shane got cleaned up with Pisi nailing him in the first half. He came out of the line. We had a good look at the tackle and it wasn’t high or late, it was a good shot,” explained Smith.

“Shano was quite ill. He was throwing up for the next five or 10 minutes on the park and we kept a good eye on him and suggested he doesn’t eat quite as much lunch and doesn’t have shrimp.

“It was a good shot and it really rattled his cage, but he’s a tough kid, a tough competitor and he obviously masterminded the comeback. I can’t speak highly enough of Shane. He was a London Irish Academy player and I was delighted to work with him at Irish and in the England setup.

“He went to Northampton for a couple of seasons and then off to France, but he’s come back and he’s really grown up. He’s a man’s man now.

“He’s a terrific character and even when he came off, the Northampton fans showed their respect for him. They’re a knowledgable rugby crowd and he deserved an honourable mention, even though he didn’t get the man of the match prize,” he added.

You can view the huge hit below, and highlights from the match on page two of this post