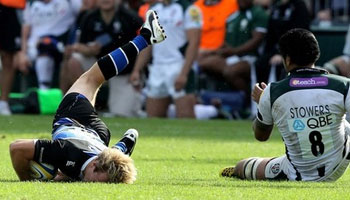 As you may have seen on the Aviva Premiership highlights post yesterday, George Stowers of London Irish received a straight red card on the weekend after he made a dangerous tackle on Bath fullback Nick Abendanon at the Recreaton Ground.

Stowers was shown a straight red by ref Dave Pearson after his flailing arm looked to have connected with Abendanons chin, stunning him for a few minutes as he flopped to the floor in a heap.

Abendanon stayed on the field and actually helped Bath to the 20-13 win, scoring a try 15 minutes later, despite being a bit dazed by what had happened. He said he didnt even realise that Stowers had been sent off for the swinging arm.

“I felt it and I was pretty dazed,” Abendanon said. “As I was running I tripped a bit and I think he was unlucky to catch me. I don’t think he meant to do it,” he added.

There was a bit of talk about it on here yesterday, so below is a better quality version for you to watch. Happy with the outcome of the hearing, or do you think red was harsh in the first place?