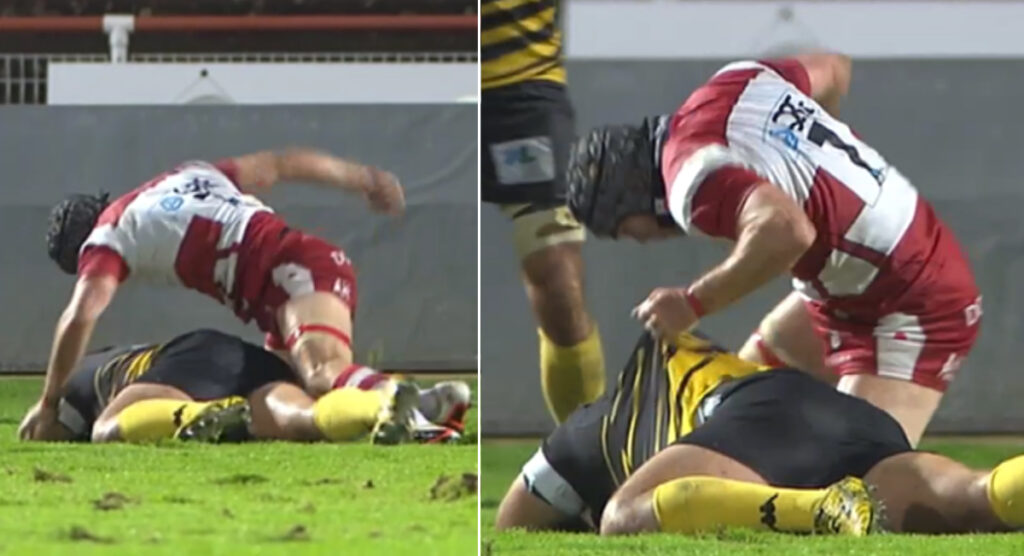 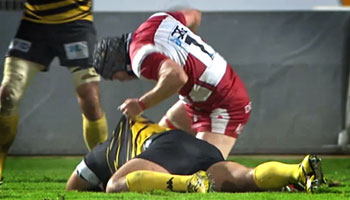 Andy Hazell unleashed against Mont De Marsan in their Amlin Challenge Cup match last night after he was allegedly eye-gouged and had a ‘severely sore’ eye. The video footage is inconclusive, but it appears there were a number of off the ball incidents.

Gloucester Director of Rugby Nigel Davies, who is set to launch an official complaint, said “We can’t condone what was done from a Gloucester view, but that was a reaction to what went on before.”

“We’ll speak to the citing commissioner, and there will be something done there. We will take our punishment, but I think they (Mont-de-Marsan) need to take their punishment too.

“We’ll look at the video, and from what I’ve seen already I’m sure we will make a complaint.

“The doctor’s had a look at Andy’s eye. It was severely sore and very red. And we took some pictures of that, because that was damning evidence in its own right.

“He’s disappointed with himself, but I think there were three incidents before that with the same player and he’s caught him off the ball again, and unfortunately Andy snapped,” Davies added.

A few minutes before there was at scuffle at the back of the lineout after Hazell got in the way of replacement prop Sebastien Ormaechea. Replays weren’t shown but it looked as though the two had a go at each other then, sparking a bit of a push and shove.

The officials seemed to yellow card the wrong player, Tongan hooker Ephraim Taukafa, after he joined later on. It’s not clear but it’s possible that they made a mistake, or viewed his intervention as a strike. Either way, that contributed to what we saw a bit later, as Hazell had had enough.

This morning Hazell tweeted the following:

“Never had a red in 12 years, extremely embarrassed by my actions. It was the 3rd time someone tried to severely injure me and I reacted. In a way I wish I could take back. But when you are in that situation you don’t know how you would react.

“Also well done to the boys on grinding out a good away win, and thanks to the travelling supporters.” You can follow @andyhazell on Twitter. Gloucester won the game 11-6.

This is now updated with the full video of the incident, and the niggle leading up to it when Hazell and the player he ended up fighting with, Ormaechea, first came to blows.
UPDATE: