Harlequins and Bath play out a classic last ten minutes 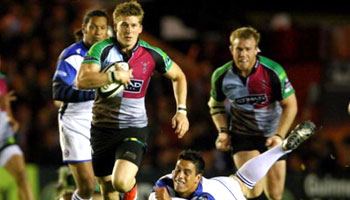 Harlequins and Bath, the two clubs who shared most of the preseason bad press, met at the Twickenham Stoop in the Guinness Premiership last weekend. Most of the match was uninspiring, but the last ten minutes had everyone on the edge of their seats.

We try to cover all the stories, scores, and incidents on Rugbydump, as well as show clips from the matches. At times its difficult to avoid spoilers, so in this case, if youd rather watch the vid without knowing what happened, stop reading now.

Neither side could break the other as two Nicky Little penalties to one from Nick Evans put the visitors up by 6-3. Evans later tied the scores with six minutes left, before centre Shontayne Hape crossed for the try that looked to have won it.

Despite relentless pressure and repeated infringements with time up, it looked as though Bath were going to hang on.

Deep into injury time Nick Easter barged over for the winning try that the video referee had decided was fairly scored. Nick Evans slotted the conversion, and Quins got their first win of the season, much to the delight of their players. 13-11 it ended.

Quins coach John Kingston hailed their resolve after they snatched the late win.

“I wonder what their emotions were, seeing the chances we created but didn’t take then we allowed them a soft try. Yet they displayed a wonderful never-say-die spirit,” he said.