Exeter Chiefs Vs Harlequins has thrown us some classic matches over recent times, and todays was no exception.

Some wonderful skills, particularly by the Quins backline, split open the Exeter defence causing the home crowd to go a ghostly quiet. The scores were flipped on either side for the final 15 minutes, one side taking the lead before the other would then pull it back.

As the clock struck 80 it appeared as if Harlequins had the game in the bag, Exeter were pinned back on their own try line with nowhere to go. Some solid phases and a break by Christ Tshiunza allowed Exeter to make their way up the pitch, giving the home fans a glimmer of hope.

Some wonderful play later, and Christ Tshiunza had the ball back in his ginormous hands as he raced over to give Exeter the victory over their London visitors.

It was a moment for the crowd to go wild, as their team had weathered a barrage of attacking prowess at the hands of Quins for the past 40 minutes. However, for a couple of minutes at most, there was to be doubt as to whether the try would stand.

A previous pass from Stuart Hogg was deemed to be forward by the television match official.

50/50 imo for forward pass. Depends where you’re from. #EXEvHAR

Speaking in referee Ian Tempest’s ear, the TMO indicated that it was indeed a clear forward pass and that the receiving player was in fact actually stood in front of the passer. When showing referee Ian Tempest the footage it became quite clear that the on-field decision should be reversed.

However, refusing to spend any more time deliberating this, Tempest overruled his TMO on the basis that the angles shown indicated no obvious forward motion. This came much to the shock of the match commentators and fans alike. 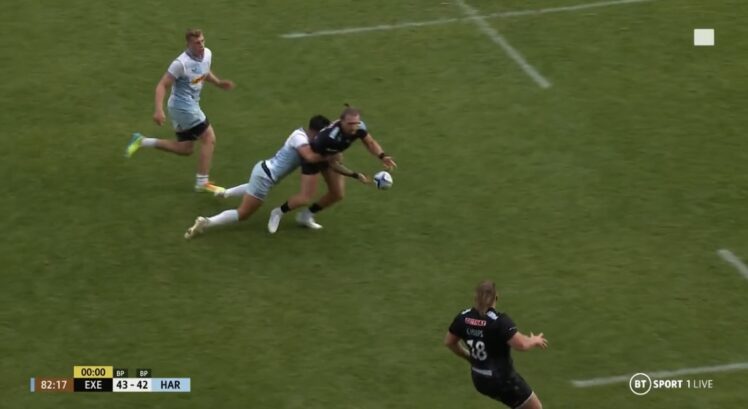 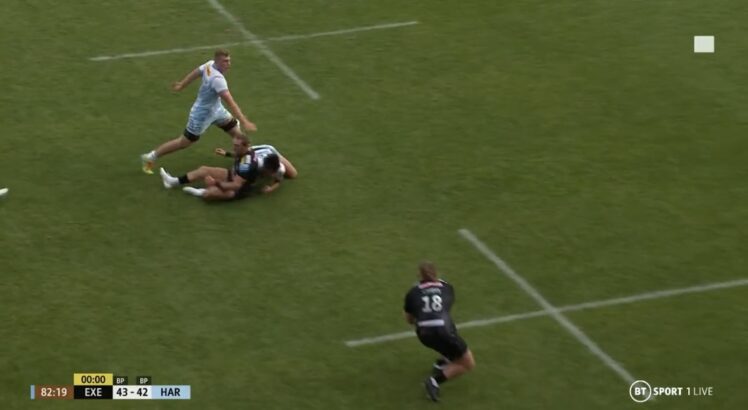 Albeit a fantastic match to watch between the two sides, they provided another classic match for supporters.

Arghhh hate to be salty 🧂 not our style, but not quite sure how that forward pass was deemed as not forward? How was there only one camera angle?

ANYWAY, devastated not to finish the job, great heart and guts, ultimately gave us too much to do though. On on 🃏

Harlequins been absolutely robbed by the referee there #EXEvHAR 🤦🏻‍♂️😤

Harlequins should be feeling robbed after that. If the person you’re passing to is standing in front of you, that’s a forward pass. TMO showed the referee the best angles.

Shame it put a sour end on a fantastic game. #EXEvHAR

That is an absolute disgrace of a decision. TMO called it staright away and the ref too arrogant to change his mind on the try. Absolutely rotten.