Highlights from Day One of the 2013 Wellington Sevens 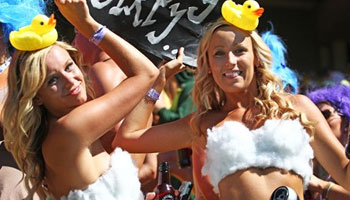 Day One of the New Zealand Sevens was all about the party atmosphere, outrageous fancy dress, and some big upsets. After a great day of rugby that included some incredible tries and plenty of surprises, we now know the line up for the quarter finals.

The day had it’s fair sharing of upsets and started with a England beating hosts New Zealand 19-14, with Mat Turner scoring a great try. The reigning champions are still in with a chance of claiming their third successive Wellington title though, as they take on Australia in the next round.

Fiji were one of the shocks of the day as they lost twice and now sit in the second tier bowl for the first time in their history. France join them there after losses to Kenya and Argentina.

Kenya were unbeaten on the day, beating France, Argentina and Tonga and now face South Africa in all all-African quarter final. South Africa themselves suffered defeats to Canada and Samoa, but a 21-0 win over Wales got them the required points, and a safe passage through. 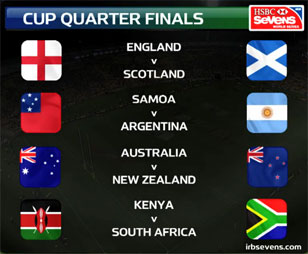 Known for it’s festival, party, and drinking atmosphere, last year’s tournament was marred by an incident with a man running on the pitch to tackle a player, and over 100 people arrested.

This year measures have been taken to prevent a repeat, and so far everything seems to be on track for the 35 000 revellers, most of which will be turning up with a groggy head tomorrow.

Below are official highlights for those that missed the games, or just can’t remember them.