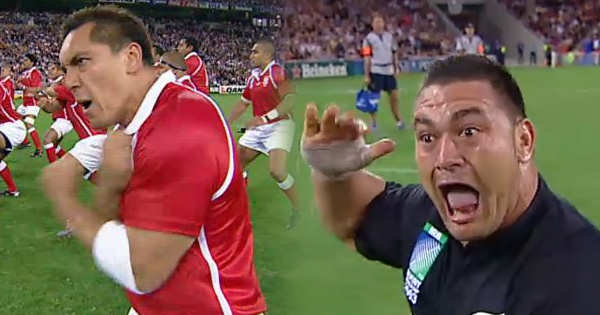 The All Blacks and Tonga meet in today’s only game of the RWC, the last match for each side in the pool stages. While Tonga’s tournament is all but over, they will be sure to take it to their not too distant neighbours, particularly when it comes to the pre-match war dances.

Tonight will be the third ever World Cup meeting between the two sides, as St James’ Park in Newcastle will be treated to a thrilling spectacle just before kickoff, when the two sides go head to head with the Haka and Sipi Tau respectively.

Here is a quick look at the last two times they met, and how that went down.

At the 2003 tournament Tonga and New Zealand met in the pool stages at Suncorp Stadium, and what took place will forever be remembered as one of the most iconic moments of the showpiece event.

As both sides lined up and Carlos Spencer led the All Blacks Haka, nobody realised that Tonga would respond with their Sipi Tau a few seconds later, creating a spectacular scene that had both sides going for it at the same time.

Back then teams didn’t have to be separated by a certain amount of meters either, so the two sides got within spitting distance of one another, and history was made.

At the last World Cup in New Zealand, both sides met again in the opening match of the tournament. Everyone watched and wondered if the same scenes would be repeated, but on that occassion Tonga went first, with the All Blacks allowing them to finish before starting the Ka Mate.

Again, it was another stirring renditon by both sides and a great way to start the tournament.

We don’t know what will happen tonight, but due to the rules put in place by the IRB a few years back, both sides will no doubt stand on their 10m lines and go for it from there. Will we ever see a repeat of that famous moment back in 2003?

“I think for the island nations because it’s a war dance you pretty much expect to do it at the same time,” says Tonga’s Siale Piutau. “It’s a face-off. I think now when the All Blacks do it to nations that don’t have a haka, they accept it and take the challenge that way.

The chances are it was a once off, but whatever happens, and whatever you think of pre-match wardances in general, it’s a unique part of the sport and one that continues to intrigue and entertain fans around the globe.

In today’s edition of RWC Daily they take an insightful deeper look at the Tongan Sipi Tau, and then we get to see a classic try scored by Mils Muliaina for New Zealand in that match in 2003.