How dangerous are concussions in Rugby? 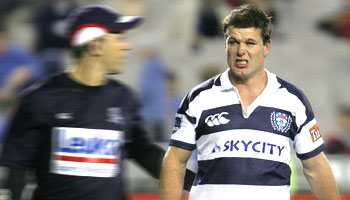 SANZAR will be trialling new concussion rules in both the Rugby Championship and ITM Cup this season. With that in mind, here is a fascinating report from One News that focusses specifically on the dangers of head knocks in sport.

There will be a mandatory five minute off-field assesment period adopted over the coming weeks for any player that takes a bad knock to the head during a match. Team and independant doctors will run a series of tests while the player, who has been replaced, sits out of the game temporarily.

If it’s deemed to be a concussion, the player will be replaced permanently, as was trialled succesfully during the recent Junior World Championship in South Africa.

Former All Black Steve Devine wasn’t fortunate to have such a ruling during a career that spanned ten years, and almost as many concussions. His final knock stayed with him for two and a half years, as he suffered from fatigue and constant migraines.

“It was tough. It was horrible for me and people around me to see how I was struggling,” Devine told stuff.co.nz. “A lot of other things you can fix. You can throw in a new hip and be up and going again in four/five months. Unfortunately one brain is all you have and you can’t sub in a new one.”

In his first test for the All Blacks he was knocked out twice in the first half. A year later he was knocked out in the Super 12 semifinal. The nuggety halfback kept at it. By 2006 however he started to notice something was wrong after taking ‘three in three weeks’.

He was sidelined for 6 months after speaking to his team doctor, but by 2007 he was off the migraine medication. He made his return but took a ‘big shot’ against the Sharks in Durban, and then in the NPC opener he took his final knock, signalling the end of his career.

“Doc just told me ‘that’s enough’,” Devine said. He’s since explained that he’s not bitter and doesn’t blame rugby, but is hoping that players of all ages will take his case as an example of when to be honest with oneself and seek help, or that coaches say enough is enough.

“I cringe when I see head collisions and kids stay on when you can clearly see they’re not well. It will catch up with you at some stage. At some stage it will bite you in the arse,” he added.

While professional rugby players are now viewed to be bigger, stronger, and faster than ever, research shows that the game has not increased in danger since the last official report in 2002.

“At the last IRB meeting we looked at all the good quality data since the turn of the millennium. There simply isn’t a year-on-year rise of injury risk,” said Dr Simon Kemp of the RFU.

– 50% of injuries occur in tackles, with running and the ruck are the next most common cause
– Under 18 schoolboys have half the injuries of the professional game, and Under 10’s even less
– Clubs will have 1.9 players injured (for 3 weeks) for every game of the season
– Hookers and flankers have the most injuries, due to their involvement in tackles and collisions
– 48% of injuries are lower limb related
– The ‘Dead Leg’ is the most common injury

The video below, which focusses on both rugby and other sports, is aimed to keep players aware of the risks of repeated blows to the head. It is not meant to scare you away from playing rugby.

The IRB have launced an online training module which aims to inform and educate players and officials on the treatment and management of concussions. You can view that here.

Thanks to stuff.co.za, One News, the RFU, and the youtube uploader