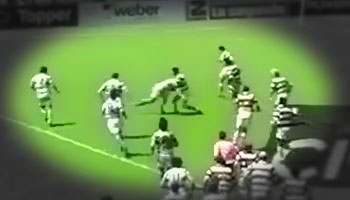 Over the course of the last two weeks there have been loads of emails and tweets sent in saying that this big tackle from Argentina should be posted on RD. While amateur clips being featured here isn’t the norm, this one is pretty good.

It comes from Buenos Aires and a game between San Isidro Rugby Club (S.I.C), and Club Atletico San Isidro (C.A.S.I), in what I’m told is one of the most important games in the league.

What is clear is that it was one helluva tackle, and despite some of the players looking as though they thought it was a bit early or without the ball, it seemed to be timed perfectly as the hit was made as the hapless victim caught it.

Since posting this earlier, I’ve been told that the guy who made the tackle is named Carlos ‘Charly’ Roldan, a flank from SIC, and it’s on flyhalf Fedrico Thomann. Roldan is fairly well known in those parts as he’s played Argentina u20’s with players such as Gonzalo Tiesi & Juan Manuel Leguizamon.

In the next few months we might look into opening things up towards accepting more amateur clip submission here on RD. It’s something we’ve toyed with for years now actually, and it will no doubt prove quite popular, even if its just random posts once or twice a month.

For now though, there has just had been another good weekend of rugby in the northern hemisphere, so please feel free to share requests about stuff you saw or heard about that you’d like to be featured. You can do so via the forum or with the contact page.

In other news, seeing as this clip is from Argentina, it was earlier announced that next years expanded Tri Nations tournament – that will include New Zealand, Australia, South Africa, and newcomers Argentina – has now been named. It will be called The Rugby Championship.

The draw will be announced later today, but for now we know the name, and that all sides will play each other home and away, for a total of six Test matches. More to follow.

Have you Registered your RD account yet? Favourite this post so it appears on your profile page!