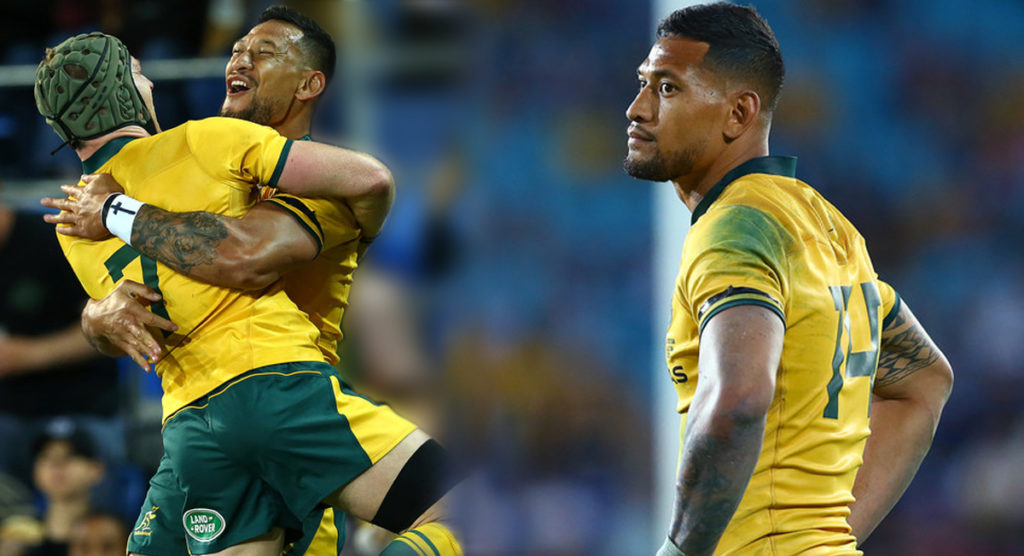 Less than a week after becoming Super Rugby’s highest try-scorer, Israel Folau has grabbed the headlines again for a post on Instagram.

The fullback shared a post that has proven to be as controversial, if not more, than similar comments made last year. This is what he said:

The description said “Those that are living in Sin will end up in Hell unless you repent. Jesus Christ loves you and is giving you time to turn away from your sin and come to him.” plus a whole lot more.

As expected, there has been a monumental backlash on social media, as thousands of fans have joined the veritable tidal wave demanding for action to be taken. Many fans are calling for the 30-year-old to be banned by the Wallabies after these comments, as he has overstepped the mark again in their eyes.

Furthermore, some fans are saying that they will no longer support Australia if Folau continues to play for them, saying that this will be disastrous for Australia’s dwindling rugby following already.

Time for @RugbyAU to put money where their mouth is on their ethics code. No more slaps on the wrist for Folau, they need to come down on him like a ton of bricks, regardless of is importance for the Wallabies.

Rugby Australia should put down a marker and ban Folau.

Blatant bigotry that has no place in the sport https://t.co/XuvmvVNRsi

Don’t agree? Are you on a different planet mate? Folau represents a National Sport, Australian Rugby’s most high profile player. He is a disgrace and should be banned for the Rugby World Cup and stripped of all payments and endorsements!! https://t.co/Z4RuHXPqGY

The @qantaswallabies are clearly no chance of winning the world cup. So why not take the opportunity the clear out the dickheads and claw back some semblance of integrity? Folau won't learn. He'll only continue to spread hate

Let’s repeat this for the daft; freedom of speech is not freedom from criticism of your speech. Israel Folau’s ongoing bigotry is disgraceful and Rugby Australia should be ashamed for letting it continue unpunished. World Cup year or not, he shouldn’t be a Wallaby.

I hope I never see Israel Folau on a rugby pitch ever again.

Before someone screams “free speech!!”, he’s free to say it, I’m free to say I find him odious for doing so and we are all free to choose not to buy tickets to watch him play. https://t.co/woPahAf5uN

I repeat: Rugby Australia simply has to act on this. They have no choice. I expect it will be fairly quick.

Rugby is my passion and I love the Wallabies. While Folau is in this team I cannot feel good about my sport or my national team. https://t.co/iTLb5Q2Lol

Despite lots of sentiment that Folau should be banned from Australian rugby, many are sceptical that anything will happen. Folau got himself in trouble for a similar outburst last year and went unpunished, and many expect the same to happen again.

Rugby Australia have said that these comments are “unacceptable”, but nothing has happened thus far.

This is because the Waratah is widely regarded as the best player in Australia currently, perhaps alongside David Pocock, and Rugby Australia would effectively be afraid to sack him.

With the World Cup less than six months away, Folau is undoutedly the Wallabies’ best chance of achieving at the tournament, and therefore the fans feel that nothing will be done to upset him.

Michael Cheika’s team have been poor over the past 12 months, and the former league man is one of the team’s only shining lights heading into the showcase in Japan.

Although many fans feel that he should be punished regardless of whether this is a World Cup year or not, they do not have enough faith in Rugby Australia to have the backbone to discipline him. Many on Twitter have effectively said that the ball is in Rugby Australia’s court, asking for them to act accordingly.

Big moment for Raelene Castle. Will be a gutsy move to sack him especially when he’s the brightest star in a game struggling on and off the field.

Bit will the "integrity" unit actually do anything considering who it is?

ARU is making me laugh, they acting like they're going to take action against Israel Folau and his homophobic comments, but truth is, He is a star player and they can never make him angry cause he'll threaten to leave and its World Cup Year , 😂😂 myekeni man

Rugby Australia have an Israel Folau sized problem on their hands. The facts are he’s said he’s willing to walk away from the game for his religious beliefs. If action isn’t taken, sponsors will walk away first. Not a great predicament in a World Cup year.

Some have defended Folau’s statements, saying that he has the right to say what he has. However, those comments have been subsumed by the criticism aimed at Folau, and those defending him have also faced a backlash.

Rugby Australia was in a very similar position this time last year, and while they are dealing with one of the best players in the world, the general feeling is that action needs to be taken.

Joe Marler had perhaps the most subtle and amusing response, when he tweeted this earlier today.