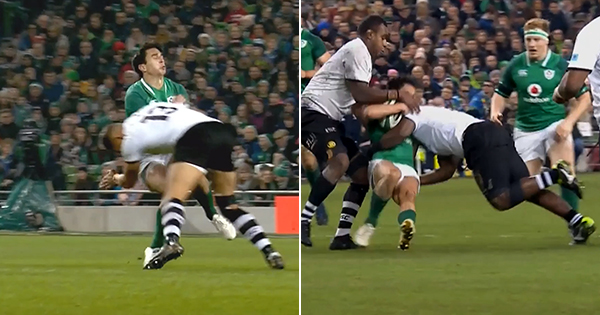 Up and coming Ireland fly half Joey Carbery got a proper introduction to Fijian rugby on Saturday night, as first centre Jale Vatubua put a massive shot on him in the opening minutes, then in the second half prop Peni Ravai made another, that time resulting in injury.

Ireland made several changes to the squad that had beaten South Africa the week before. This included Johnny Sexton for fellow Leinster outhalf Carbery, who – though he spends most of his time at fullback – is high on the list of future Ireland number tens.

Early on, Carbery was met in a ferocious tackle by Vatubua and had to take his time getting back into action after nearly being folded in half. Unfortunately for him, it wasn’t the last of his punishment, as later he was thumped by prop Ravai, resulting in a fractured left wrist and an early exit from the match.

Not content with the hit, impressive Ravai then got up to steal a penalty.

Obviously Ireland coach Joe Schmidt sees Carbery’s potential at 10, despite he and Sexton both being at Leinster. “I would love to see him play 10 more often. I think that would help his development.”

No doubt, Schmidt would also like to see a little discretion mixed with his passion and skill.

“Joey is brave, potentially to a fault, because he takes no heed who is in front of him.”

The final result was quite a bit closer than Ireland would have hoped, seeing off Fiji by the slim margin of 23-20. They’ll look to be much sharper with Argentina up next.

After this second big hit in particular, Carbery’s Autumn tour matches are certainly over. He now faces a race to get fit so that he can push for a Six Nations spot.