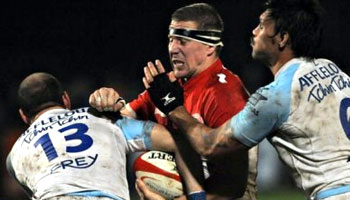 The Basque derby between Biarritz and Bayonne in the Top 14 last night turned out to be as fiery as expected, with a fight kicking off just minutes into the game. What wasn’t expected was that Imanol Harinordoquy’s father would run on to take part in it.

The French number eight’s father took to the field after his son was involved in a scrap a few meters away. He appeared to take exception to something Bayonne flanker Jean-Jo Marmouyet did, so left the stands and got stuck in.

Flyhalf Benjamin Boyet tackled him to the ground, possibly the strangest tackle he’s made in his career, and things fizzled out from there as Mr Harinordoquy senior was escorted from the field.

“I find his behaviour deplorable that he came onto the pitch to defend his son by boxing with Marmouyet at the beginning of the match,” said Christian Gajan, Bayonne’s director of rugby.

“You could have been mistaken for believing it was a youth match between two local villages, it was a scandalous episode,” he added.

Harinordoquy himself chose to comment on the win, but avoided talking about the incident.