Ireland stay on track with victory over England in Dublin 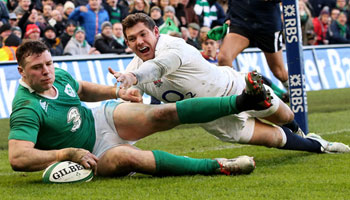 Robbie Henshaw got up high to score a fantastic try as Ireland beat England 19-9 in Dublin earlier today. The win puts the defending champions in with a great chance of retaining their title, but they still need to face a rejuvenated Wales outfit in Cardiff in a fortnight.

Following another victory that keeps Ireland on track for another title, skipper Paul O’Connell spoke about the feeling in the camp and the focus of the group.

“I think we’re doing a lot of things really well. The way we’re preparing is a lot different from what we’ve done in the past in my time here,” POC said.

“I just think the game-by-game focus suits Irish teams and Irish people. I’m sure the coaches look at the bigger picture, but for us, there will be a fairly brutal review of this game, and we’ll be put under pressure then to prepare certain things for Wales, and that will be the sole focus of the players.

He also hinted at retirement, saying it might have been his last Six Nations match against England, but he wouldn’t commit to that, as he claims he genuinely hasn’t made a decision yet.

“I’m undecided. I’ll probably make the decision soon enough, I really want to play to the World Cup and be in the best shape I can there and see after that. I’m really enjoying playing at the moment in the set-up we have in Ireland, but I’m conscious we have a lot of good second-rows coming through as well.”

Coach Joe Schmidt has given an injury update, after stars Johnny Sexton and Sean O’Brien were forced to leave the field. “Johnny just felt a twinge in his hamstring when he was kicking that conversion from the corner,” Schmidt said.

“Again, we haven’t had that assessed yet so I can’t really comment as to the severity or non-severity of that. With Sean, we’re not too sure how it happened.

“We had a look at the tape and maybe it was a head-to-head clash, but he’s going to through the HIA [Head Injury Assessment] protocols and he’ll work his way through those in the next six days.

“He’s certainly asymptomatic at the moment, he’s fine, just a little bit grumpy and disappointed he didn’t see out the match,” Schmidt added.