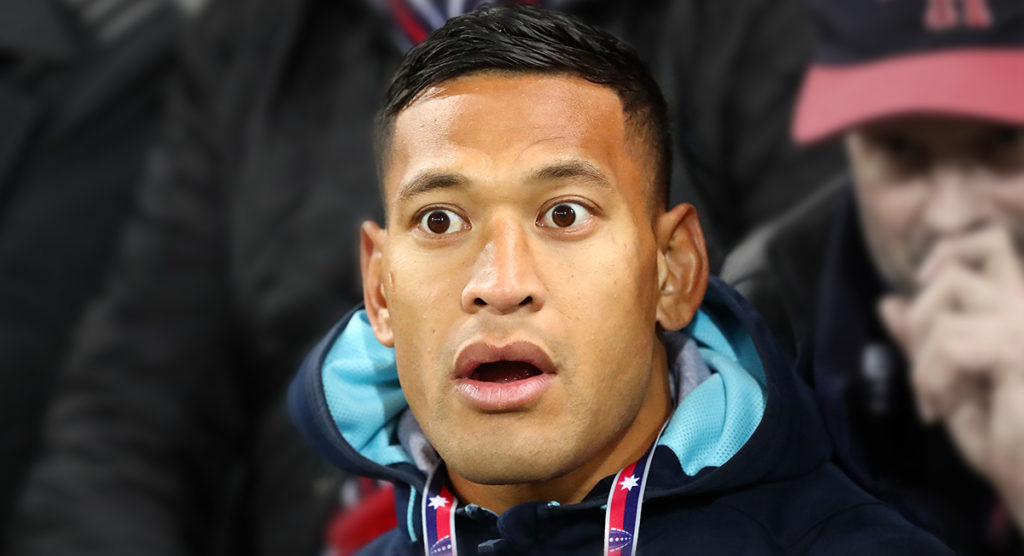 Israel Folau has today been issued a sanction directing termination of his playing contract for his high-level breach of the Professional Players’ Code of Conduct. The Wallabies and Waratahs star was effectively sacked after an accumulation of divisive social media posts.

Rugby Australia Chief Executive, Raelene Castle said: “While Rugby Australia accepts the panel’s decision directing termination of Israel Folau’s playing contract for his high-level breach of the Code of Conduct, we want to stress that this outcome is a painful situation for the game.

“Rugby Australia did not choose to be in this situation, but Rugby Australia’s position remains that Israel, through his actions, left us with no choice but to pursue this course of action.

“This has been an extremely challenging period for Rugby and this issue has created an unwanted distraction in an important year for the sport and for the Wallabies team. But our clear message to all Rugby fans today is that we need to stand by our values and the qualities of inclusion, passion, integrity, discipline, respect and teamwork.

“I’ve communicated directly with the players to make it clear that Rugby Australia fully supports their right to their own beliefs and nothing that has happened changes that. But when we are talking about inclusiveness in our game, we’re talking about respecting differences as well.

“When we say Rugby is a game for all, we mean it. People need to feel safe and welcomed in our game regardless of their gender, race, background, religion, or sexuality.

“We thank the tribunal panel for their decision and we respect the time, consideration and expertise the panel members brought to this process.

“Representing Australia and all Australians on the Rugby field is a privilege. Selection is dependent upon a player’s ability to contribute to the Wallabies, and the game of Rugby itself, in a positive and consistent manner both on and off the field. When players sign a contract with the Wallabies, they sign up to the values of the team and the sport.

“Israel is a great Rugby player and we are disappointed and saddened by the fact that he will not see out his four-year commitment to the Wallabies and Waratahs,” she said.

Folau has the option to appeal the panel’s determination of a high-level breach of the Code of Conduct and the sanction handed to him. Under the Code, appeals must be lodged within 72 hours of receipt of the sanction.

“It has been a privilege and an honour to represent Australia and my home state of NSW, playing the game I love,” Folau said in a statement.

“I am deeply saddened by today’s decision to terminate my employment and I am considering my options.”

Folau believes he should be allowed to play on after taking to Instagram last month to proclaim “hell awaits drunks, homosexuals, adulterers, liars, fornicators, thieves, atheists and idolaters”.

“The Christ ian faith has always been a part of my life an I believe it is my duty as a Christian to share God’s word. Upholding my religious beliefs should not prevent my ability to work or play for my club and country.

“I would like to thank my wife Maria for her love and encouragement to true to our beliefs. We have been humbled by the support we have received from family, friends, players, fans and the wider community.

“Thank you also to those who have spoken out in my defence, some of whom do not share my beliefs but have defended my right to express them.”

It’s been estimated Folau has already shelled out more than $100,000 fighting for his career, with a law employment expert predicting the 30-year-old would be spending $25,000 a week on legal fees.